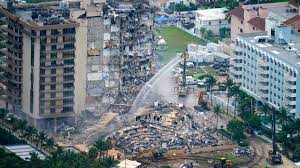 No new survivors have been found as the search through rubble of the collapsed Miami-area residential building enters a third day.
There are still 159 people missing people as of Saturday morning, with search and rescue teams finding no survivors on Friday, a day after a large portion of the 12-story condo complex in Surfside, Fla., collapsed.
At least four people were killed, while 120 people have been accounted for, Miami-Dade County Mayor Daniella Levine Cava (D) said Friday.
The town of Surfside released a report Friday night showing that an engineer had warned in 2018 about “major structural damage” to the building. A lawyer for the Condominium Board has said proposed repairs were set to begin soon before the building collapsed on Thursday.
The consultant who put together the report, Frank Morabito, said he found "abundant cracking" and other issues in the “concrete columns, beams, and walls” of the ground floor parking garage, with photos showing cracks in columns and exposed steel reinforcements.
Florida Gov. Ron DeSantis (R), who declared a state of emergency the day the building fell, said Friday during a stop in Pensacola that people deserve a “definitive” answer on why the structure collapsed.
“And that’s an explanation that needs to be an accurate explanation… and it’s important that it’s timely,” he added, according to the Sarasota Herald-Tribune. “We have a lot of families here who’ve lost loved ones when this building collapsed. They have a right to know. And we have other folks who were able to get out safely, but then lost their homes.”
Rescue crews have been using dogs, heavy machinery and their own hands to move rubble and attempt to find anyone who is still alive, The New York Times reported.
“We’re frustrated because we feel as if they are alive,” Toby Fried, who is waiting to hear news of his missing friend, said. “We offered to bring more manpower — professional searchers. There’s nobody to talk to. We are waiting. We want to help out.”
Officials have said they have all the resources they need, but between poor weather and pop-up fires at the site, the search has been made more difficult.
“Ideally, a South Florida sunny day with a nice ocean breeze would give us the optimal conditions,” said Obed Frometa, a fire lieutenant with Florida Task Force 1 of the Federal Emergency Management Agency’s National Urban Search and Rescue Response System, according to the Times.
“That is unfortunately not what we’re dealing with in this disaster,” Frometa added.
National