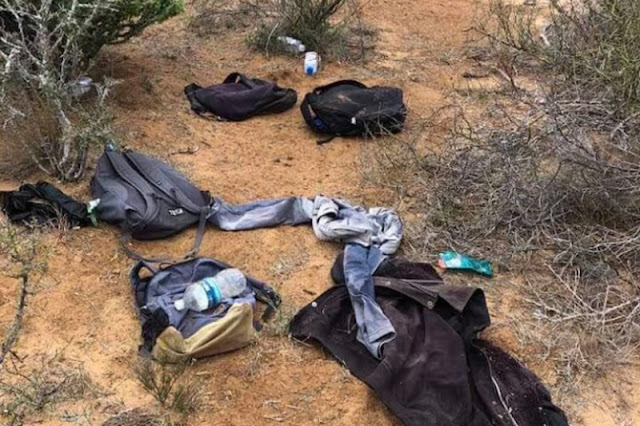 By Julie Tomascik
Texas farmers and ranchers who live and work near the southern border say the recent surge of immigrants illegally crossing into the U.S. has significantly increased.
The crisis along the U.S-Mexico border threatens their personal safety, overwhelms local resources and causes serious financial hardship and disruption.
Fences are sometimes cut as illegal immigrants move across farms and ranches. Others are destroyed in bail-outs during high speed chases.
Homes and barns are vandalized. Equipment and vehicles are stolen. Clothes, backpacks, other items and trash are left behind in the “camps” as illegal immigrants move through their property, leaving farmers and ranchers left to clean up the mess. And fear and anxiety are high for families concerned about their safety.
To help bring awareness to the border crisis and the impacts on rural families, Texas farmers and ranchers continue to share their stories online through Texas Farm Bureau’s (TFB) Border Crisis Impacts webpage.
The webpage was launched in late April to highlight the ongoing struggles of farm and ranch families along the border.
“The impacts of the border crisis are many,” TFB President Russell Boening said. “Farm and ranch families are bearing the brunt of this unprecedented influx. The personal accounts on the webpage are real.”
One South Texas rancher describes how he grew up on the family ranch near the border and how he was accustomed to three to four illegal immigrants crossing the ranch each month. But, now, the situation has changed.
“The situation has changed 100%. We have immigrants coming through the ranch, not three or four a month like in the past,” he said. “Just yesterday, we had 30 immigrants come through the ranch. The day before that, 40 immigrants came through the ranch. I think we had a total last week of about 140.”
In May, five young migrant girls were found alone by Jimmy Hobbs on his ranch near the Rio Grande River as temperatures soared past 100 degrees.
For Stephanie Crisp-Canales, it’s important to share her perspective of the border crisis to raise awareness of the conditions of living near the border.
“Unless you have been here and have lived here, you really have no idea just how bad it is,” she said.
After sharing her story with TFB and on social media, Crisp-Canales has been interviewed by numerous media outlets, including Fox News.
“We have had multiple bail-outs a day. We’ve never had that before,” she said. “The landowner isn’t compensated at all. We have to pay to fix our fences, to replace our gates. When this is happening multiple times a day, this is costly.”
But it’s also the extra stress and worry.
“When we go to check our cattle now, if my husband gets out to open a gate, I have to be watching. If I get out and open a gate, he’s watching.
There have been numerous ranchers that have been assaulted while they were opening a gate because illegals would come up on them because they want their vehicle,” she said.
Crisp-Canales and her husband raise cattle and have two children.
“When you’re on your own property and you don’t feel safe, it’s really unnerving. It really is. But that’s what we’re dealing with down here,” she said. “It’s like nothing we have ever seen before. I really hope something can be done.”
TFB believes the U.S. must secure its borders and enforce lawful immigration, and the organization asks federal and state authorities to help mitigate the border problem as soon as possible.
Farmers and ranchers from Arizona and New Mexico are also sharing their stories of financial hardship and disruption on the TFB Border Crisis Impacts webpage.
Texas