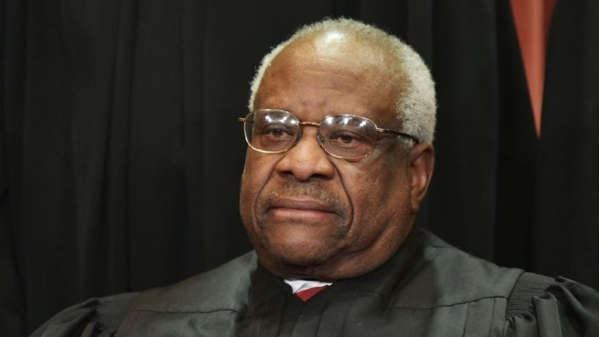 Supreme Court Justice Clarence Thomas on Monday said federal marijuana laws “may no longer be necessary” due to the large number of federal policies that have “greatly undermined its reasoning.”
Thomas, one of the most conservative justices on the bench, opined on the country’s federal marijuana laws in the court’s denial of a petition to hear an appeal from a Colorado medical marijuana dispensary that was not given federal tax breaks that other businesses were provided, according to NBC News.
"A prohibition on interstate use or cultivation of marijuana may no longer be necessary or proper to support the federal government's piecemeal approach," Thomas wrote.
He said the 2005 Supreme Court ruling in Gonzales v. Raich, which bolstered federal laws that made having marijuana illegal, may now be outdated.
“Whatever the merits of Raich when it was decided, federal policies of the past 16 years have greatly undermined its reasoning,” Thomas wrote.
He called the federal government’s approach to marijuana regulation “half-in, half-out.”
“Once comprehensive, the Federal Government’s current approach is a half-in, half-out regime that simultaneously tolerates and forbids local use of marijuana,” Thomas wrote.
“This contradictory and unstable state of affairs strains basic principles of federalism and conceals traps for the unwary,” he added.
A number of states in the U.S. have passed their own regulations regarding marijuana use, according to NBC News.
Thirty-six states allow medical marijuana, while 18 allow recreational use.
Connecticut Gov. Ned Lamont (D) last week signed a bill that legalized recreational marijuana for adults in the state, becoming the 18th state to do so.
The federal tax law, however, does not permit marijuana businesses to subtract their business costs, the network noted.
“Under this rule, a business that is still in the red after it pays its workers and keeps the lights on might nonetheless owe substantial federal income tax,” Thomas wrote.
Thomas said the federal government’s “willingness to often look the other way on marijuana is more episodic than coherent.”
National