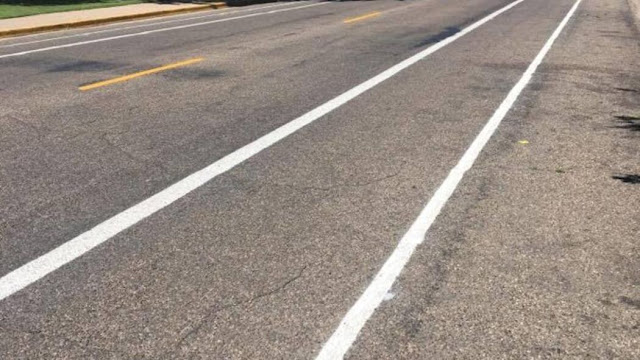 New bicycle lanes and safety improvements to frequently-used cycling areas in several sections of the city will soon enhance the overall experience for cyclists and pedestrians.
The most notable improvement is the installation of new bike lanes on S.W. 7th Ave. and S.W. 8th Ave. that will connect downtown with Rails to Trails. The newly installed lanes will run from the Hodgetown/Civic Center area to Crockett Street and from Johnson Street to Bonham Street.  The new lanes are being striped and will be operational the week of June 14. Traffic operations staff will also be adding proper signage to these areas.
The additional bike lanes were presented to the City of Amarillo Pedestrian and Bicycle Committee and have been discussed over the past year. The plans also fall under guidance from the City of Amarillo’s Master Plan. The new lanes will give cyclist more opportunities to commute from one location to another and will create a connective path from the downtown to Coulter Street via Rails to Trails and to the Julian area via 15th Avenue.
New or re-striped bike lanes and shared lanes have been installed at the following locations:
8th Avenue from Buchanan Street to Crockett Street (one way travelling west).
7th Avenue from Crockett Street to Buchanan Street (one way travelling east).
15th Avenue from Bonham Street to Johnson Street.
Johnson Street from 15th Avenue to Hodgetown/Civic Center area.
Motorists are asked to make note of the changes and use caution in these areas as pedestrians and cyclist use the new areas for travel.
Local