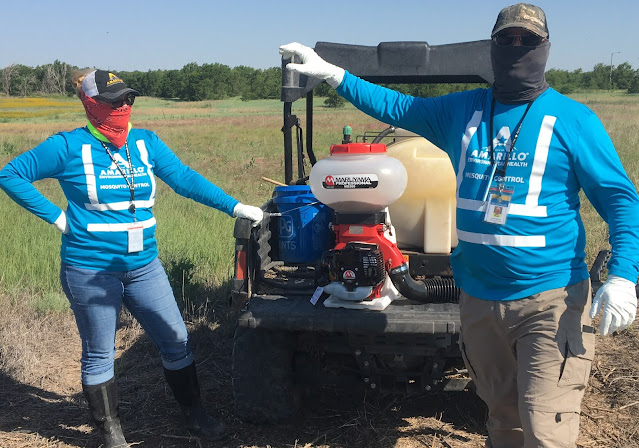 Amarillo residents may see City of Amarillo employees dressed as if preparing for combat. When it comes to employees of the City of Amarillo (COA) Environmental Health Department, they are in combat – against mosquitoes.
COA began its mosquito spraying program in March – an annual battle against the biting insects/pests that can cause harmful illnesses such as West Nile virus. Considering the inordinate amount of rain the Amarillo area has received this spring and early summer, the COA mosquito spraying program is more important than ever as far as public and community health.
“We are seeing a large increase in the mosquito population in Amarillo, and that is primarily due to the amount of rain we have received,” said COA Director of Environmental Health Anthony Spanel. “We have dramatically increased the scope of our mosquito spraying program as a result.”
COA sprays approximately 15-20 locations each week, not including areas receiving complaints by citizens, which are investigated. COA has spent $35,000 for the mosquito spraying program (not including personnel costs) since March, with a typical budget of $8,000 to $10,000 for chemicals.
An interesting aspect of the program is that COA is using a new chemical that is safer for the environment (fatal only for mosquitoes and not other insects/animals in the water) and also safer for staff which administer the chemicals to high infestation areas.
“The public can definitely help,” Spanel said. “It is extremely important for individuals to check for standing water on their property and make sure to drain it every couple of days. In addition, keeping your lawn mowed and removing debris or standing water from house gutters can make a huge difference in the mosquito population.”
Local