Chauvin sentenced to 22.5 years in prison for murder of George Floyd 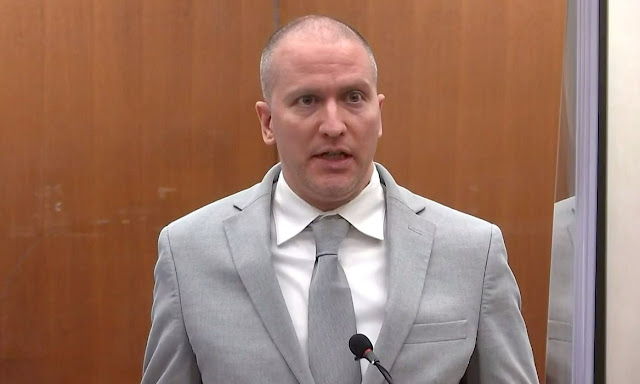 Former Minneapolis police officer Derek Chauvin was sentenced to 22 1/2 years in prison on Friday afternoon for the murder of George Floyd last May.
Handed down by Hennepin County District Court Judge Peter Cahill, the sentence was greater than what legal experts predicted.
“Determining the appropriate sentence in any case and in this case is a legal analysis. It's applying the rule of law to the facts of an individual and specific case,” Cahill said from the Hennepin County courthouse just after 2:30 p.m. “This sentence is not based on emotion or sympathy. At the same time I want to acknowledge the deep and tremendous pain that all the families are feeling, especially the Floyd family.”
The increased sentence comes after the judge in May agreed with prosecutors that there were aggravating factors when Chauvin fatally knelt on Floyd’s neck for more than nine minutes that warranted a departure from the presumptive sentence length.
Cahill, in his earlier ruling, concluded that Chauvin abused his “position of trust and authority” as a police officer and displayed “particular cruelty” when he knelt on Floyd’s neck during his arrest, an action that rendered Floyd unresponsive.
Floyd was later pronounced dead at a nearby hospital.
On April 20, Chauvin was convicted of second-degree murder and manslaughter as well as third-degree murder.
Since the criminal counts stemmed from one action — Chauvin killing Floyd — the sentence is based on only the second-degree murder conviction, the most serious of the crimes for which he was found guilty.
Per state guidelines, the maximum sentence for unintentional murder in the second degree is 40 years, but because Chauvin has no previous criminal record, the presumptive sentence was 12 1/2 years, with an acceptable deviation range of 10 years, 9 months, to 15 years.
But because Cahill agreed with the prosecution’s aggravating factors motion, the judge had the discretion to increase the sentence.
The common prediction among legal experts was that Cahill would decide on a 30-year sentence, double the high end of the presumptive sentence and it was what the head prosecutor, Minnesota Attorney General Keith Ellison (D), requested in a motion at the beginning of the month.
Members of Floyd’s family were present in the courtroom for the sentencing.
Floyd’s murder was the catalyst for nationwide protests decrying police brutality and systemic racism last summer.
His death also spurred the creation of the George Floyd Justice in Policing Act, a sweeping police reform bill that Congress has been working to reach a bipartisan consensus on for months.
Chauvin declined to give a formal statement in court due to “additional legal matters,” but expressed his condolences to the Floyd family.
He also said that there would be “some other information in the future that would be of interest.”
National