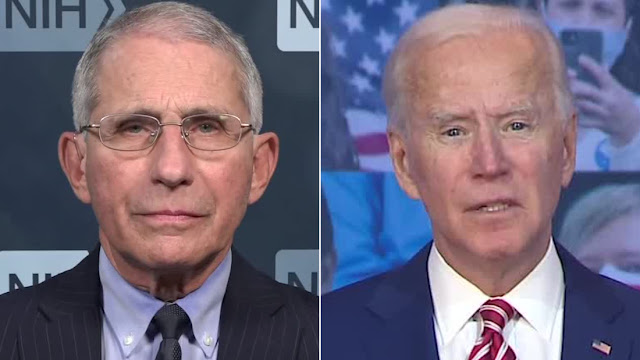 President Biden on Friday made clear he has confidence in his medical adviser Anthony Fauci as conservatives ramp up their attacks on the government's top infectious diseases expert over his comments on the origins of COVID-19.
"Yes, I'm very confident in Dr. Fauci," Biden told reporters in Delaware after giving remarks on the economy. Biden had left the room, but popped back in to respond to a question about the head of the National Institute of Allergy and Infectious Diseases.
Fauci has been a target for some Republicans dating back to last year, when he evolved his guidance on masking and distancing as more information about the pandemic emerged. Former President Trump turned Fauci into a consistent foil at campaign rallies as he and other Republicans held the doctor up as an example of an overcautious approach to the pandemic that had shut down the economy. Fauci required a security detail as he and his family faced threats.
Fauci has reemerged as a punching bag for conservatives over his explanations for the origins of the coronavirus. Trump and other conservatives have argued the virus came from a lab in Wuhan, China, and suggested Fauci was not forthcoming about the evidence for that theory.
Republican critics of Fauci have pointed to newly released emails from 2020, published by The Washington Post, that show correspondence early in the pandemic about the possibility the virus came from a lab. While Fauci cast doubt on that prospect publicly, the emails do not clearly show him outright rejecting it.
"Now everyone, even the so-called 'enemy,' are beginning to say that President Trump was right about the China Virus coming from the Wuhan Lab," Trump said in a statement on Thursday. "The correspondence between Dr. Fauci and China speaks too loudly for anyone to ignore. China should pay Ten Trillion Dollars to America, and the World, for the death and destruction they have caused!"
Sen. Josh Hawley (R-Mo.), a Trump ally, called for Fauci's resignation on Friday.
Biden has ordered the intelligence community to further study the origins of the virus and submit a report within 90 days laying out the evidence for whether it spread naturally or came from a lab, though it may have been accidentally transmitted.
The White House on Thursday, asked about the recently published emails, praised Fauci for his work on the pandemic response.
"The president and the administration feel that Dr. Fauci has played an incredible role in getting the pandemic under control, being a voice to the public throughout the course of this pandemic," press secretary Jen Psaki told reporters. "And, again, I would reiterate a lot of these emails are from 17 months ago or more, certainly predating this administration, but some time ago in — as we look to history."
National