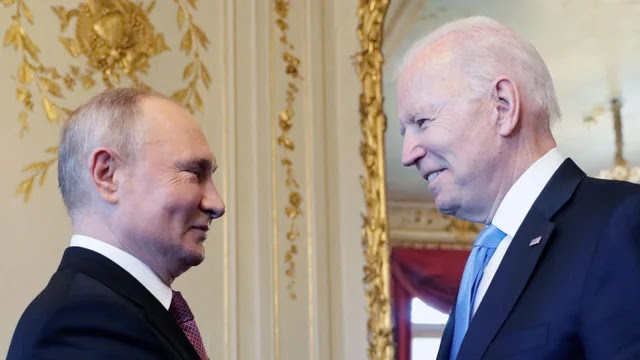 President Biden arrived in Geneva at the site of his summit with Russian President Vladimir Putin on Wednesday, shaking the Russian leader’s hand after the two posed for a photo with the Swiss president.
“I hope that our meeting will be productive,” Putin said as he sat down with Biden inside the 18th century Villa La Grange, where the summit is taking place.
Biden responded: “It is always better to meet face to face” and establish a “predictable and rational” way forward.
Biden nodded when asked if he trusted Putin, a gesture that the White House later denied was in response to any question in particular. and the president laughed as and shrugged at the chaos of the media scrum.
“It was a chaotic scrum with reporters shouting over each other,” tweeted White House communications director Kate Bedingfield. “@POTUS was very clearly not responding to any one question, but nodding in acknowledgment to the press generally. He said just two days ago in his presser: ‘verify, then trust.’ ”
The summit, which is taking place at the 18th century Villa La Grange, is Biden’s first meeting with Putin since Biden took office in January. Biden and Putin last met a decade ago.
Wednesday’s meeting is expected to be tense and frosty, as Biden prepares to confront Putin on human rights, cyberattacks and other issues. At the same time, Biden hopes to find common ground with Russia on matters like climate change and arms control.
Biden and Putin are meeting behind closed doors along with Secretary of State Antony Blinken and his Russian counterpart, Russian foreign minister Sergey Lavrov and interpreters. They will meet with a larger group, including both presidents and five officials from each side, later in the day.
The two leaders were seated and appeared to be relaxed and comfortable before going into their meeting. Blinken was taking notes while the press shouted questions.
The scene with the media was chaotic, with several international reporters vying for a spot and shouting questions, including Americans and Russians.
Officials say the summit could last as much as four or five hours. Putin is expected to hold his own press conference later in the day, after which Biden will also hold a solo press conference.
“I think the best way to deal with this is for he and I to meet, he and I to have our discussion. I know you don’t doubt that I’ll be very straightforward with him about our concerns, and I will make clear my view of how that meeting turned out, and he’ll make clear from his perspective how it turned out,” Biden told reporters Sunday when asked about his decision to hold a solo press conference.
U.S. officials have set low expectations for the meeting between the two.
Biden has sought to take a tougher line toward Russia than his predecessor, former President Trump, who was widely criticized for his warm remarks towards Putin.
Trump triggered controversy at a 2018 summit with Putin in Helsinki when, during a join press conference with the Russian leader, he publicly doubted the U.S. intelligence assessment that Russia had interfered in the 2016 election.
Biden has harshly rebuked Russia for interfering in American elections and its role in the unprecedented SolarWinds cyberattack and since taking office has imposed a raft of sanctions on Moscow for its aggressive behavior, including the Kremlin’s poisoning and jailing of opposition leader Alexei Navalny.
At the same time, Biden has faced criticism for waiving sanctions on the company spearheading Russia’s Nord Stream 2 pipeline, in what has been interpreted as a move designed to avoid friction with Germany. Some critics have also accused Biden of rewarding Putin with a one-on-one meeting so early in his term.
Biden told reporters Monday that he would convey to Putin “that I’m not looking for conflict with Russia, but that we will respond if Russia continues its harmful activities and that we will not fail to defend the Transatlantic Alliance or stand up for democratic values.”
World