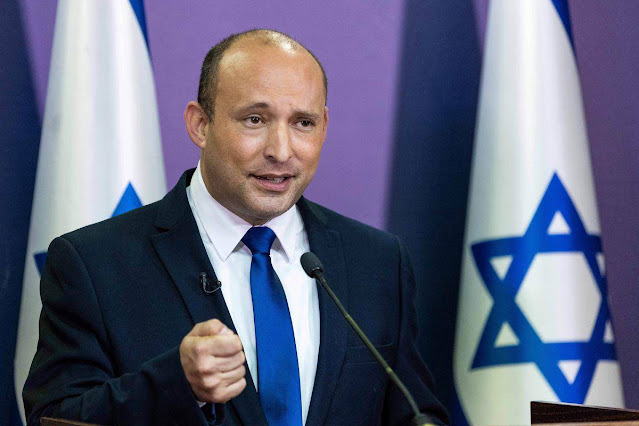 Right-wing Israeli politician Naftali Bennett was sworn in as Israel's new prime minister on Sunday, ending Benjamin Netanyahu's 12-year term in office while hailing the start of his term as the "beginning of a new day."
Israeli newspaper Haaretz reports that Bennett, 49, convened a meeting with cabinet members on Sunday night, telling them, "[w]e are at the beginning of a new day. We will work to mend the rift among our people and to return the country to functioning."
Naftali joined with centrist Israel politician Yair Lapid, 57, to shore up the votes to form a new government and remove Netanyahu.
According to Haaretz, Bennett said that, in order to maintain the ideologically diverse government that they have now formed, "we must all maintain restraint and moderation in ideological terms."
As part of the agreement between Bennett's Yamina party and Lapid's Yesh Atid, Lapid will serve as Israel's prime minister for two years after Bennett has served two years.
As part of the guidelines of the agreement, the new government will pursue legislation that limits the prime minister's term to eight years, shut down multiple government ministries and increase supplemental income for the elderly among other goals.
President Biden spoke to Bennett on Sunday over the phone, offering his “warm congratulations,” according to the White House. Biden also "expressed his firm intent to deepen cooperation” between the U.S. and Israel “on the many challenges and opportunities facing the region.”
Canadian Prime Minister Justin Trudeau also offered his congratulations to both Bennett and Lapid on Sunday.
"Congratulations on the formation of a new Israeli government, Prime Minister @NaftaliBennett and Alternate Prime Minister @YairLapid. Together, let’s explore ways to further strengthen the relationship between Canada and Israel," Trudeau wrote on Twitter.
Netanyahu vowed to regain power shortly before Bennett was sworn in, telling supporters, "We'll be back."
As CNN reports, Netanyahu rebuked the opposition coalition, saying, "You call yourself the guardians of democracy, but you are so afraid of democracy that you are ready to pass fascist laws against my candidacy -- the language of North Korea and Iran -- in order to maintain your regime."
World