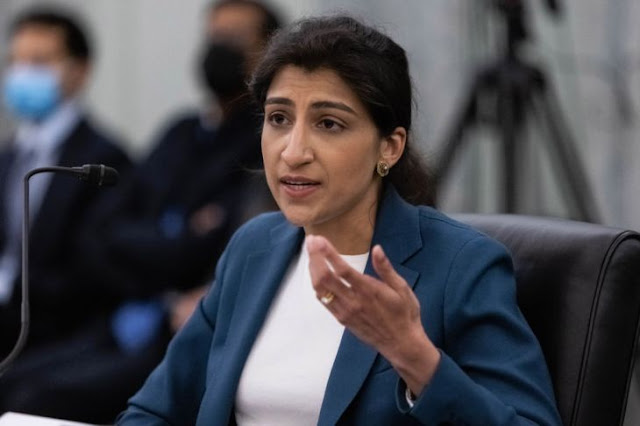 President Biden’s newly confirmed commissioner of the Federal Trade Commission (FTC), Lina Khan, was promoted to chairwoman of the FTC today. This was somewhat surprising, and not just because Khan will be the youngest chair of the FTC ever. She is also a notable critic of tech monopolies. Her ascendancy signals a growing feeling on the left and the right that Big Tech corporations need to be restrained by the government. But before we herald a new era of trustbusting, we should be careful that the proposed solution isn’t worse than the actual problem.
Khan is well-regarded as a rising academic mind, already an associate professor of law at Columbia University, at just 32 years old. Her influential paper, “Amazon’s Antitrust Paradox,” argued that consumer prices alone were inadequate in assessing monopolistic practices. Josh Hawley, a Yale Law graduate like Khan, has made similar arguments, too. But there are two questions that Hawley and other antitrust conservatives should ask before celebrating Khan’s appointment.
The first is whether breaking up tech companies will actually help consumers. Khan and Hawley both seem to agree that Amazon, Facebook, and Microsoft are not overcharging customers. Google has yet to charge for search. While allegations of stifling innovation have sprung up, these charges continue to ring hollow. Every year, new phones roll out with more features, such as curved screens, HD video, 5G, etc.
While tech companies do purchase other fledgling companies, the successful ones integrate these new companies into a preexisting platform. This model works, and it is one the reasons the United States is a worldwide leader in technological innovation. It seems unlikely that getting the government involved will spur more growth.
The more important question is whether breaking up alleged monopolies will improve the technological ecosystem for conservatives. Conservatives skeptical of Big Tech are concerned that these monopolies are a threat to political freedoms. But why should we believe that breaking up companies like Facebook will amplify conservative voices?
Silicon Valley is overwhelmingly liberal. That isn’t going to change if Google or Microsoft is split up, unless the GOP wants to mandate affirmative action for Republicans in tech fields. If conservatives want the government to enforce speech laws to protect or promote right-wing media, they should be wary. Mechanisms used to mandate the promotion or appearance of certain views can also be used to discriminate against them. Something like this already happens abroad. Governments across Europe and Canada enforce more-stringent hate-speech laws than we have in the States. Instead of getting banned from Twitter, their policies land people in prison.
We also need to be frank about the current state of media in America. At times, it seems like conservatives believe there is no outlet for right-wing media. But Americans are still tuning in to conservatives. The biggest hits on Facebook come from right-wing pages. Tucker Carlson’s show is the largest news show in America. Newsmax recently touted itself as the fourth-largest cable network in America. The mainstream media has a left-wing bias, but this shows the mainstream media isn’t as powerful as it used to be.
However, we should be sure that the cure is not worse than disease. Anti–Big Tech conservatives may find common ground with Lina Khan and the FTC, but before we celebrate bipartisanship, let’s be sure new regulation will actually result in good outcomes. Count me skeptical.
Opinion