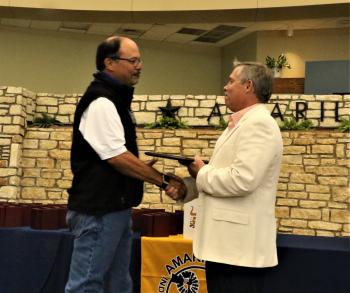 Mark Leach, the retiring principal of North Heights Alternative School, is the recipient of Amarillo ISD’s highest employee honor. Leach was presented the 2021 Bob Ashworth Award for Outstanding Service at the District’s annual Service Recognition Banquet, held near the end of each school year.
The Bob Ashworth Award is given annually to an employee with an outstanding career of service to students and staff. This award is named after Ashworth, who served as superintendent of AISD from 1958 to 1978. Along with a plaque and a monetary award, Leach’s portrait will hang outside the boardroom of the Rod Schroder Education Support Center.
Retiring employees were also honored at the banquet. AISD is the city’s largest employer with more than 5,000 employees and supporting the District’s 32,000 students.
Local