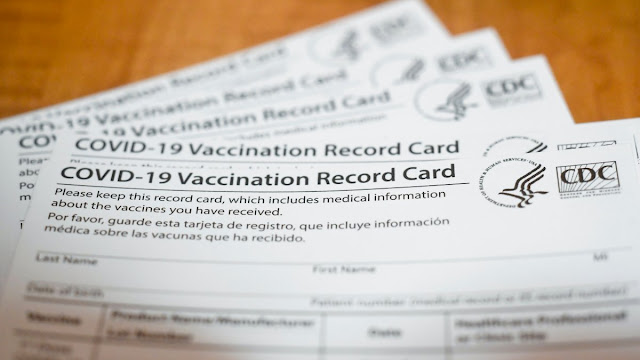 Texas Gov. Greg Abbott (R) signed legislation on Monday barring businesses and government agencies from requiring proof that someone has been vaccinated against the coronavirus before providing services.
Abbott issued an executive order in April banning government entities from requiring so-called vaccine passports. The new law, passed in the waning days before Texas legislators adjourned for the year, would extend to private businesses as well.
The law bars those establishments from requiring documentation showing that someone has either been vaccinated against or has recovered from an infection with the coronavirus before gaining access to or receiving services from a business. Businesses that require vaccine passports would be barred from receiving grants from or winning contracts with the state.
“I’m signing a law today that prohibits any business operating in Texas from requiring vaccine passports or any vaccine information,” Abbott wrote on Twitter. “Texas is open 100% without any restrictions or limitations or requirements.”
Vaccine passports have become the latest cause taken up by Republican elected officials in what they cast as the war between onerous public health restrictions and individual liberty.
Only two states — New York and Hawaii — have implemented vaccine passport rules. New York allows residents to get a digital certificate, dubbed the Excelsior Pass, that shows they have been vaccinated, and sports venues such as Yankee Stadium and Madison Square Garden have used those passes to admit fans to sections where they can congregate more closely. Hawaii’s Safe Travels program allows vaccinated individuals to travel between islands without adhering to testing or quarantine rules.
Texas will be the seventh state to enact a formal law barring use of the passports. Alabama, Indiana, Iowa and North Dakota have banned the use of passports by both business and government entities, while Utah and Arkansas have barred governments from requiring proof of vaccination.
Governors in Arizona, Florida, Georgia, Idaho, Montana, South Carolina, South Dakota and Wyoming have signed executive orders limiting a government agency’s ability to require vaccine passports. Legislation is pending in dozens of other states.
The Biden administration has said in recent weeks that it will not pursue a national vaccine passport. Homeland Security Secretary Alejandro Mayorkas said last month that his department was exploring creating a system that would allow Americans traveling abroad to show proof they had been vaccinated, something several European Union and Asian nations require for entry.
Polls show most Americans favor vaccine passports for activities such as traveling on a plane or attending events with large crowds. But the same surveys show a majority do not want businesses to require proof of vaccination for activities such as going to work, staying in a hotel or dining at a restaurant.
In April, a Gallup poll found 55 percent of Americans opposed requiring proof of vaccination to work at a job site, and 60 percent were opposed to requiring proof for dining in a restaurant. Republicans are more likely to oppose vaccine passports than Democrats are, while majorities of independent voters say they too oppose passports for most activities.
Texas