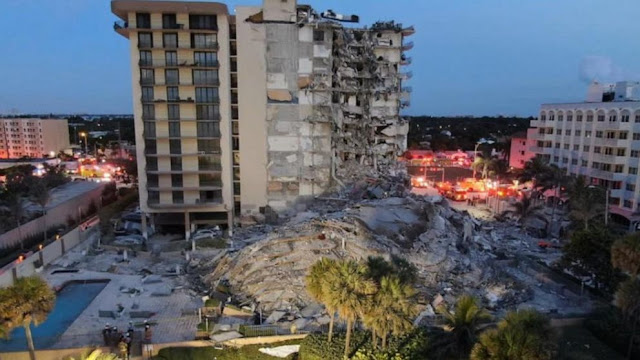 Nine people are now confirmed dead following the collapse of a Miami-area building on Thursday.
Miami-Dade County Mayor Daniella Levine Cava (D) notified reporters of the new death toll during a news conference on Sunday.
One victim passed away at a hospital, and the other eight were recovered from the collapse site, according to Cava.
She added that four of the victims have been identified and their next-of-kin have been notified.
She said authorities are currently “making every effort” to identify the remaining five.
“We really are only doing two things here: we’re pulling residents out of the rubble and we’re supporting the families. That’s our only objective right now,” Surfside Mayor Charles Burkett told reporters at the news conference.
A 12-story Miami-area building partially collapsed on Thursday at around 1:30 a.m.
About 55 of the 136 units in the building fell.
Cava on Saturday night said 156 people remain unaccounted for, as rescue efforts at the collapse site continue. So far, 130 people were accounted for.
Cava during the Saturday news conference said the county will conduct an audit over the next 30 days in an effort to quickly remedy any issues an inspection may reveal.
The town of Surfside publicly released a 2018 structural report on the building, which revealed that an engineering consultant who examined the building warned that it had “major structural damage,” which informed plans for a repair project that were set to begin soon.
The National Institute of Standards and Technology, which is responsible for spearheading investigations into building failures, is also sending a group of scientists and engineers to investigate the collapse and determine if a larger probe into potential structural failures is needed.
President Biden on Thursday said the federal government is ready to support Floridians in the aftermath of the building collapse.
“I say to the people of Florida, whatever help you want that the federal government can provide, we are waiting, just ask us, we’ll be there,” Biden said.
National