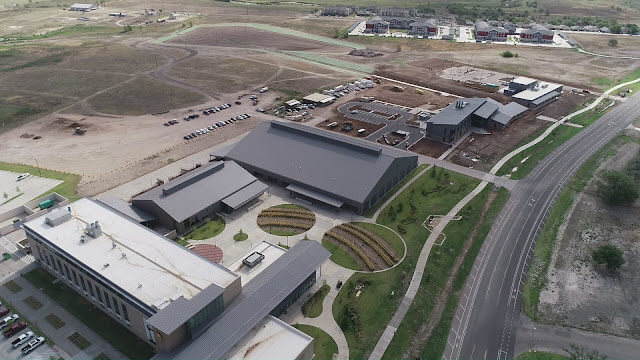 By Jennifer Gauntt
The Texas A&M College of Veterinary Medicine & Biomedical Sciences (CVMBS), West Texas A&M University (WT), and the Texas A&M Veterinary Medical Diagnostic Laboratory (TVMDL) will celebrate on Thursday, June 3, the grand opening of two facilities that will further expand upon the Texas A&M University System’s (Texas A&M System) veterinary medical, education, and research missions in the Texas Panhandle.
Texas A&M System Chancellor John Sharp, Texas A&M President Dr. Kathy Banks, WT President Dr. Walter Wendler, CVMBS Dean Dr. John August, Texas A&M Vice Chancellor and College of Agriculture and Life Sciences Dean Dr. Patrick Stover, and TVMDL Director Dr. Bruce Akey will commemorate the opening of the Charles W. “Doc” Graham ’53 DVM, The Texas A&M University System Center during a ceremony beginning at 10 a.m. outside of the center.
The center comprises the Veterinary Education, Research, & Outreach (VERO) Building and the Charles W. Graham, DVM TVMDL Building. Both facilities opened in September, signaling the culmination of the Texas A&M System’s investment in large animal health in the Texas Panhandle. The project is supported by $90 million in capital improvements and $5 million in faculty hires, for a total of $95 million in investment in the region. Ground was broken on both buildings in December 2018.
About the VERO initiative and building
The VERO Building is a $22-million 36,000-square-foot facility that now serves as a regional veterinary teaching center that creates a gateway to the CVMBS for students interested in pursuing veterinary medicine from the Texas Panhandle and West Texas, while also facilitating collaborative, multidisciplinary research among scientists from across the region.
Not only are WT pre-veterinary students taught in the facility but it will also serve as the home for the CVMBS’ 2+2 Doctor of Veterinary Medicine (DVM) program, which will enroll its first cohort of 18 first-year DVM students in the fall of 2021.
The VERO initiative offers other unique educational opportunities for current CVMBS veterinary students, including fourth-year clinical rotations, immersive externships, summer internships, and food animal production-focused tours that introduce them to the region and the livestock industries.
The building also houses on-site researchers who will continue to address Panhandle-specific issues and those with broad impact on the livestock industries.
To support the educational mission of VERO, the Texas A&M System also announced last year a $5 million commitment to support additional faculty hires.
About the Panhandle-based TVMDL and building
The TVMDL facility, named after a Texas A&M Distinguished Alumnus and one of Texas’ most renowned equine veterinarians, is a $17.6-million, 22,000-square-foot building that features the latest technology for diagnostic services in bacteriology, pathology, serology, and virology, as well as spaces for receiving and processing and necropsy and support.
The opening of the building in September signaled a relocation to Canyon from its previous location in Amarillo, which was opened in 1975 to specifically serve the Panhandle’s cattle feedlot industry as an extension of the College Station-based laboratory.
Almost 50 years later, TVMDL’s Panhandle laboratory has expanded its clientele beyond livestock producers, offering testing for almost every animal species for some of the largest animal agriculture companies in the world as well as the ever-important smaller independent producers.
The Canyon-based facility offers an open-flow laboratory environment for enhanced collaboration, including one of only two high-containment, biosafety level 3 (BSL-3) laboratories in Texas, specifically designed to test for animal diseases that pose a significant threat to the agriculture economy and public health.
Even as one of the largest and busiest diagnostic labs in the country, TVMDL makes education and training of colleagues a priority and will serve as a practical training ground for future veterinarians, while also actively providing training experiences for undergraduates, residents, newly minted DVMs, and postdoctoral students.
Both the VERO facility and TVMDL’s relocation to the WT campus will further strengthen the TAMUS’ focus on veterinary medicine in the Panhandle.
About Dr. Charles W. Graham
Dr. Charles W. “Doc” Graham ’53 is a Texas A&M Distinguished Alumnus and one of the world’s top equine veterinarians, a leader in Texas’ horse and cattle industries and a tireless volunteer, advocate, and youth mentor.
Graham is the only individual to serve as president for both the Texas Quarter Horse Association (TQHA) and the Texas Thoroughbred Association (TTA) and is the only person to be selected as Horseman of the Year by both associations. He has also been recognized by Texas A&M’s AgriLife, College of Agriculture & Life Sciences, and CVMBS, as well as having been inducted into multiple halls of fame.
His veterinary career included building, with Dr. W. H. Cardwell, the Elgin Veterinary Hospital in the early 1960s, which grew into one of the largest equine veterinary facilities in the nation. Graham is now owner of a number of other businesses, including the 1,300-acre Southwest Stallion Station in Elgin, which has bred some of the top stallions and broodmares in the quarter horse industry.
In 2018, it was announced that the new, Canyon-based Texas A&M Veterinary Medical Diagnostic Laboratory would bear Graham’s name. The naming of the center in his honor was approved during the Texas A&M System Board of Regents’ quarterly meeting in November 2020.
The grand opening ceremony will be streamed live vetmed.tamu.edu/vero/grand-opening/.
Local