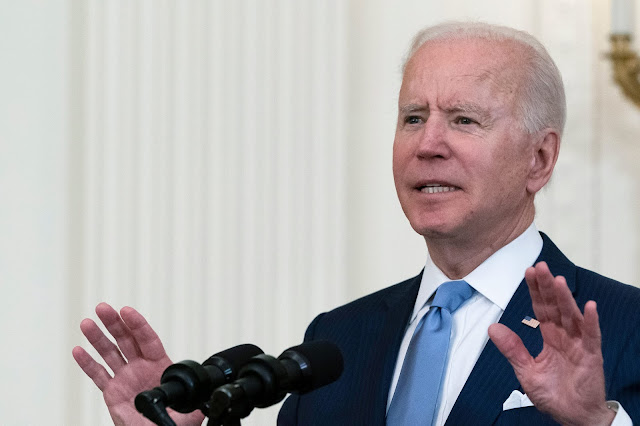 White House officials are presenting a $1.7 trillion counterproposal to Republicans on Friday in pursuit of a bipartisan deal on infrastructure, reducing the price tag of President Biden’s infrastructure proposal by $550 billion.
“In our view, this is the art of seeking common ground,” White House press secretary Jen Psaki told reporters at a briefing Friday. “This proposal exhibits a willingness to come down in size, giving on some areas that are important to the president ... while also staying firm in areas that are most vital to rebuilding our infrastructure and industries of the future.”
According to a three-page memo obtained by The Hill outlining the counterproposal, the White House is offering to reduce funding for broadband expansion to $65 billion to match a Republican offer spearheaded by Sen. Shelley Moore Capito (R-W.Va.). The new measure also reduces proposed investments in roads, bridges and other major infrastructure projects from $159 billion to $120 billion, which is still more than double the $48 billion originally proposed by Republicans.
Additionally, the memo says that Biden is willing to “take off the table” investments in research and development, supply chains, and manufacturing and pursue them in separate ongoing legislative efforts.
Psaki mentioned negotiations surrounding the Endless Frontiers Act and the CHIPS Act as potential avenues during Friday’s briefing.
Officials also suggested Biden is open to compromise on a financing facility for which a “range of infrastructure projects” would be eligible. Biden’s initial plan included a $27 billion facility for energy infrastructure and a $10 billion one for medium-sized manufacturers.
White House representatives met virtually with officials on Capitol Hill on Friday as part of ongoing infrastructure talks. Capito presented a counteroffer to the White House earlier this week after initially proposing a $568 billion infrastructure proposal with other GOP senators.
The memo was sent by the White House to Capito’s office.
White House officials and Republican senators involved in the infrastructure negotiations have publicly expressed optimism about the ongoing talks, though there is broad skepticism in both parties that a deal can be reached.
In a sign of how far apart both sides remain, Friday’s memo contains a section more than a page long that raises concerns about investments that are either “entirely left out” or inadequately funded by the Republican proposal.
For instance, officials reiterated Biden’s support for power sector investments and tax credits; funding to plug oil and gas wells and clean up abandoned mines; building construction funding and tax credits; funding for veterans’ hospital repairs; and an expansion of home care.
The memo also suggests that Biden will not back down on his push for funding for electric vehicles, elimination of lead pipes and greater resilience of physical infrastructure to protect it from extreme weather.
Republicans have been critical not only of the size of Biden’s infrastructure proposal, which he laid out in March, but also of his proposed increase of the corporate tax rate from 21 percent to 28 percent to pay for the investments. They have suggested covering the costs with user fees.
The White House and Republicans remain far apart on how to pay for a package.
"[Biden] fundamentally disagrees with the approach of increasing the burden on working people through increased gas taxes and user fees, regardless of where users live or the type of vehicles they drive,” the White House memo sent to Republicans states. “As you know, he made a commitment to the American people not to raise taxes on those making less than $400,000 per year, and he intends to honor that commitment.”
“Major corporations are among the largest users of transportation infrastructure in our country. They are also paying the lowest level of taxes as a share of our economy since the 1930s. Our approach should ensure that corporations are paying their fair share,” it continues.
White House officials say they want to see progress on infrastructure by Memorial Day — a deadline less than two weeks away — but it’s unclear exactly what they will view as progress.
Some Democrats don’t want Biden to spend too long negotiating with Republicans before deciding to use budget reconciliation to push through a bill with only Democratic support.
But Biden ran on being a unity candidate who could work with Republicans, and allies say he genuinely wants a bipartisan deal if an agreement can be reached.
National