Trump lashes out at prosecutors over criminal probe into company 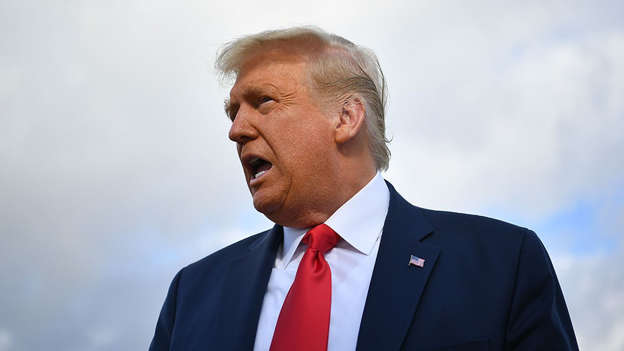 Former President Trump on Wednesday lashed out at state and local prosecutors in New York after they announced that the two offices were conducting a joint criminal investigation into his company.
In a lengthy statement airing a list of grievances against Democrats in both Washington, D.C., and New York, Trump dismissed the criminal probe as a politically motivated effort to attack him.
"I have built a great company, employed thousands of people, and all I do is get unfairly attacked and abused by a corrupt political system. It would be so wonderful if the effort used against President Donald J. Trump, who lowered taxes and regulations, rebuilt our military, took care of our Veterans, created Space Force, fixed our border, produced our vaccine in record-setting time (years ahead of what was anticipated), and made our Country great and respected again, and so much more, would be focused on the ever more dangerous sidewalks and streets of New York," Trump wrote in the statement.
The New York attorney general's office said Tuesday night that its investigation with the Manhattan district attorney into the Trump Organization is now exploring criminal charges against the company.
“We have informed the Trump Organization that our investigation into the organization is no longer purely civil in nature," Fabien Levy, a spokesman for the attorney general's office, said in a statement.
"We are now actively investigating the Trump Organization in a criminal capacity, along with the Manhattan DA. We have no additional comment at this time.”
A spokesman for the district attorney's office declined to comment on Trump's statement. The New York attorney general's office did not immediately respond when asked for comment.
Manhattan District Attorney Cyrus Vance (D) obtained Trump's tax returns in February after a protracted legal battle with the former president that reached the Supreme Court twice. During the court case, the office's prosecutors hinted at the contours of their investigation, citing media reports about purported tax schemes at the Trump Organization.
And New York Attorney General Letitia James (D) has taken the company to court over the past year to obtain internal documents and testimony in what was then a civil investigation into whether the Trump Organization had inflated the value of its assets to attract investors and favorable loans.
Both investigations stemmed at least in part from congressional testimony by Michael Cohen, Trump's former personal attorney and ally who has turned on his former boss since pleading guilty in 2018 to various fraud and campaign finance charges. Cohen is currently serving a three-year prison sentence.
In his statement on Wednesday, Trump referred to Cohen as a "low life" and said both James and Vance have been using their prosecutorial powers to harass him for political reasons.
"That is what these investigations are all about—a continuation of the greatest political Witch Hunt in the history of the United States," Trump said. "Working in conjunction with Washington, these Democrats want to silence and cancel millions of voters because they don’t want 'Trump' to run again. As people are being killed on the sidewalks of New York at an unprecedented rate, as drugs and crime of all kinds are flowing through New York City at record levels, with absolutely nothing being done about it, all they care about is taking down Trump."
National