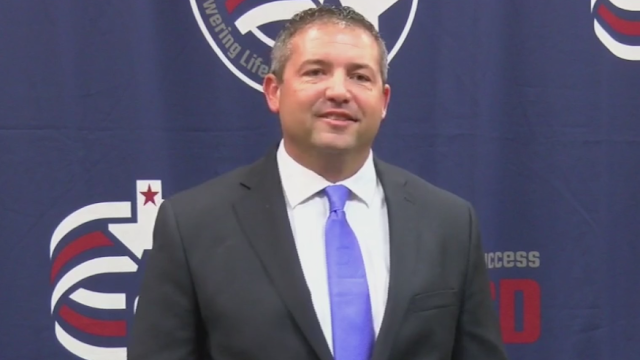 On Wednesday, the Canyon Independent School District Board met and officially announced that Todd Winfrey has been hired as the new head football coach at Canyon High School. Winfrey replaces longtime coach Blake Bryant, who announced his retirement earlier this month.
“When you’re an assistant coach you always dream of being a head coach. When you get older you look at it and you want be that head coach in a premiere place.
"I think Canyon is that place for me," Winfrey said.
Winfrey was an assistant coach under Bryant for 21 seasons, the last 18 as the offensive coordinator.
"When you've been in this program with Coach Bryant for 21 years, we've built it year by year. There's a foundation of core values that won't change," Winfrey said.
While the foundation of the Canyon football program will remain in place, Winfrey noted that he and the staff might change things up a little bit.
Bryant said that Winfrey as earned the opportunity to lead the Eagle's football program.
“What I know Todd can do is not just maintain what we’ve built, but exceed expectations and make the program even better. He’s going to do an unbelievable job," Bryant said.
Canyon, which advanced to the state semifinals twice (2006 and 2020) under Coach Bryant, also made the third round of the playoffs three times in 2013, 2015 and 2018. The Eagles finished 12-2 in 2020 and made the 4A-Division semifinals falling to eventual state champion Argyle.
Local