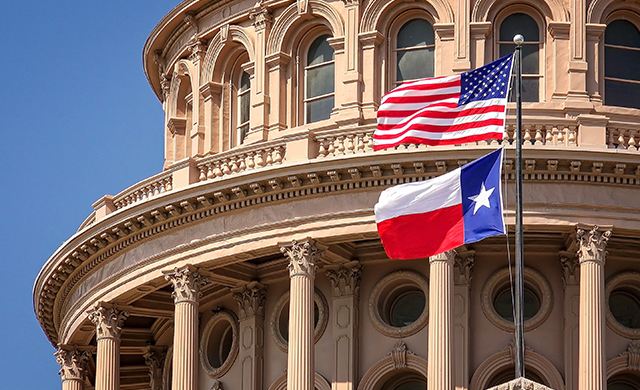 By Bethany Blankley
Several bills passed the 87th Texas legislature to strengthen local government accountability, limit taxation, expand transparency, and ensure protections for property owners, their sponsors argue.
“Many issues were addressed that nobody could have predicted in January of 2020,” the Texas Public Policy Foundation said of the bills. “We saw a remarkable amount of bipartisan efforts to Keep Texas Texan.” The legislation will serve as examples of “good, conservative governance.”
On the issues of property rights and taxation, SB 1585, HB 1869, SB 1438, SB 604, and SB 1427 passed both chambers. The majority have not yet been signed into law by the governor.
SB 1585, filed by Sen. Bryan Hughes, R-Mineola, expands protections for property owners who fall under a historic designation process. The bill closes a loophole that some municipalities have used to go around property owners who opposed their properties being designated as historic landmarks. It has not yet been signed by the governor.
HB 1869, filed by Rep. Dustin Burrows, R-Lubbock, prohibits local governments from taking on debt for the purposes of calculating certain ad valorem tax rates, thereby increasing taxes. The bill protects last session’s tax reforms by including debt not approved by voters like certificates of obligation in the 3.5% voter-approval tax rate calculation.
Under current law, these items are excluded from the tax rate calculation, and in some cases, lead to higher taxes. The top 20 local government issuers of certificate of obligation (bonds, warrants, other debt) accounted for approximately 40% of all debt outstanding in Bexar County and Travis County, a legislative analysis found. CO debt is not always need-based and has been misused by local governments, Burrows argues, which is why the bill sought to close the loophole and prevent local governments from increasing taxes in this way. It has not yet been signed by the governor.
SB 1438, filed by Sen. Paul Bettencourt, R-Houston, closes a loophole local governments used during the state’s emergency order shutdown last year to raise property taxes above the 3.5% threshold without voter approval. Last year, for example, “…at least 45 local governments, the city of Houston included, either went over the 3.5% or considered doing so…” Although Houston reduced its tax rate, it "allowed for revenue growth above the 3.5% cap but under the 8% cap,” The Houston Chronicle reported. The bill has not yet been signed into law.
Another Bettencourt bill, SB 604, prohibits municipal management districts from issuing bonds after receiving a valid petition by property owners for the district’s dissolution. The purpose of the bill is “to prevent districts from deliberately bypassing the voices of property owners who have called for a district to dissolve by continuing to issue more debt, thereby artificially continuing the life of a district.” It has also not yet been signed by the governor.
Another Bettencourt bill, SB 1427, distinguishes between physical and economic damage during times of disaster for property tax purposes. The bill amends current law relating to the applicability of the temporary exemption from ad valorem taxation of a portion of the appraised value of certain property damaged by a disaster. It has not yet been signed by the governor.
On the issue of government transparency, several bills passed.
SB 1225, filed by Sen. Joan Huffman, R-Houston, clarifies when local government can and cannot ignore Public Information Act requests during a natural disaster. The natural disaster from 2020 provided local governments “an unreasonable excuse to ignore PIA requests from the public,” supporters of the bill argue. It was signed into law by Abbott and becomes effective Sept. 1.
HB 2404, filed by Rep. Morgan Meyer, R-Dallas, increases transparency for local governments by creating a centralized database for local Chapter 380 and Chapter 381 economic development agreements. It directs the state comptroller’s office to create and maintain a database of local economic development agreements. Local governments that do not comply with providing information can be fined a $1,000 civil penalty. It has not yet been signed into law by the governor.
SB 244 filed by Bettencourt requires more transparency from tax increment reinvestment zones (TIRZ). TIRZ were created to attract new investment in designated areas and help finance costs of redevelopment. The bill places a meeting of the board of directors of a TIRZ under the authority of the Texas Open Meetings Act in order to improve the public's ability to be notified and attend the meetings. It has not yet been signed by the governor.
SB 1168, filed by Sen. Donna Campbell, R-San Antonio, prohibits cities from imposing fees and fines on residents living in extraterritorial jurisdictions. Under current law, local governments subjected many Texans to regulation without representation, including the threat of municipal fines and fees, after voting against annexation at the ballot box. The bill makes it illegal for them to do this in the future. It has not yet been signed by the governor.
Also related to these jurisdictions, SB 1338, filed by Sen. Judith, Zaffirini, D-Loredo, requires cities to provide additional written disclosure to property owners residing in them before they enter into certain development agreements consenting to annexation. This bill was signed by the governor and is effective Sept. 1.
Texas