Sod Poodles returning to Hodgetown for first time since 2019 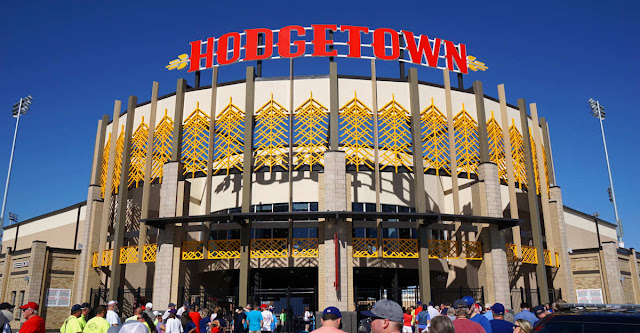 On Tuesday, May 18, Hodgetown will welcome back baseball fans from all around the Texas panhandle after a 615-day hiatus following the cancellation of the 2020 Minor League Baseball season. The Amarillo Sod Poodles will take the field for their first homestand of the season against the Midland RockHounds – Double-A affiliate of the Oakland Athletics – in a six-game set.
The Sod Poodles will host their first game at Hodgetown since game two of the 2019 Texas League Championship Series on May 18 with first pitch scheduled for 7:05 p.m. Fans are encouraged to arrive early to the stadium with gates opening an hour prior to first pitch at 6:00 p.m. The first 1,500 fans through the gates will receive a replica 2019 Texas League Championship ring (for individuals 12 & up) presented by Jerry and Margaret Hodge and the Downtown Athletic Club. Succeeding the game and the Opening Night Fireworks show, the first 2,000 fans will also receive a 2021 Magnet Schedule presented by Double D Roofing as they exit the stadium.
The rest of the opening homestand will see the return of fan-favorite daily promotions such as Weiner Wednesdays, Thirsty Thursdays, Friday Night Fireworks, and Hometown Hero Sundays.
Wednesday, May 19 will feature $1 hot dogs for Weiner Wednesday presented by Texas Ford Dealers. The first Thirsty Thursday presented by Barnes Jewelry of the 2021 season will take place on Thursday, May 20 when fans can enjoy $2 fountain sodas, $2 small Coors Light or $5 large Coors Light.
On Friday, May 21, the Sod Poodles will transform to the Pointy Boots de Amarillo for the first time in franchise history as part of Minor League Baseball’s Copa de la Diversión initiative. FirstBank Southwest is proud to sponsor the first Friday Night Fireworks show of the season at the conclusion of the game.
Another fireworks show presented by Toot N’ Totum will ensue shortly after the final out is recorded between the Sod Poodles and Rockhounds on Saturday, May 22. A clear plastic bag giveaway presented by IVRS will also take place and be given to the first 1,500 fans who enter the gates at Hodgetown on Saturday.
The opening homestand of the season will conclude on Sunday, May 23, with the first 1,500 fans to enter Hodgetown receiving a Buddy Reed Bobblehead (for individuals 12 & up) presented by Reed Beverage. Sunday will also be the first Hometown Hero Sunday presented by Bell where the Sod Poodles proudly offer 50% off tickets for members of the Military and First Responders. The Sod Poodles players will also debut the 2019 Championship Gold jerseys on Sunday afternoon. First pitch scheduled for 1:05 PM.
Local