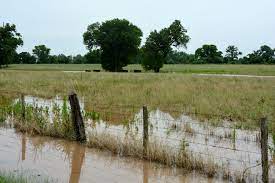 Rainfall events over the last 30 days improved soil moisture levels for drought-stricken parts of the state but also left standing water and soggy, saturated soil conditions in others, according to Texas A&M AgriLife Extension Service reports.
Much of the state has received multiple inches of precipitation from multiple storm systems since late April. Those storms delivered much-needed rainfall and subsequently improved soil moisture indexes in drought-stricken areas. But the deluge has delayed plantings and harvests in other parts of the state, as well as causing flooding and a range of other problems and potential problems for producers.
Drought was a major concern for growers in western parts of the state, including the South Plains and Panhandle. Winter wheat and other cool-season grain and forage crops performed poorly for the most part, and the outlook for warm-season crops like corn, sorghum and cotton were not positive into spring.
Many acres in those areas were dry planted. Plants emerged in some acres and were progressing slowly due to lack of rain and cooler-than-normal temperatures. Other seed failed to germinate with the lack of moisture.
Rainy weather over the past several weeks has changed soil moisture conditions and crop outlooks, at least in the short term, said Reagan Noland, Ph.D., AgriLife Extension agronomist, San Angelo.
“Everyone is reacting to the moisture we’ve received over the past two weeks,” he said. “Everyone wants to plant, and it’s drying up enough now to plant, so a lot of producers are scrambling. Earlier in April, it looked pretty bleak, and everyone was discouraged about getting a crop started, but they’re more optimistic now.”
While the rains helped the soil moisture index, Noland said additional timely rains will be necessary to carry crops to the finish line. Much of Texas croplands rely on fall and spring storms to replenish soil moisture levels lost to evapotranspiration by plants and evaporation by summer temperatures, sun and wind. But seasonal storms are especially important to producers in western parts of Texas.
Those storms not only fuel crops, but they fill ponds and water tanks and restore native rangelands for livestock and wildlife.
Scattered rainfall totals
John Nielsen-Gammon, Ph.D., Texas state climatologist, Bryan-College Station, said there had been significant improvements to rainfall counts around drier areas of the state like San Angelo and South Texas.
Much of the entire state has received more than 1 inch of rain over the past month, and many areas received double-digit amounts after abnormally dry conditions since fall 2020, Nielsen-Gammon said.
Rain events delivered scattered precipitation, he said, as indicated by amounts for individual areas around the state.
Eastern portions of the state reported significant amounts. Corpus Christi received 12-19 inches; the Lower Rio Grande Valley, 3-12 inches; Wintergarden, 4-14 inches; Victoria, 8-26 inches; Houston-Beaumont, 6-14 inches; and Tyler-Longview, 8-14 inches.
Rainfall amounts were also scattered for drought-stricken regions like the Lower Rio Grande Valley, which received 3-12 inches over the past month. The Waco-Temple area received 3-7 inches; Abilene, 5-8 inches; San Angelo, 2-6 inches; Amarillo, 1-6 inches; Plainview, 2-4 inches and Lubbock, 1-3 inches.
The near-term forecast pattern looks to be drier for southern parts of the state and wetter for northern Texas, including the High Plains, Nielsen-Gammon said. But the predictability for extended forecasts of storm activity becomes difficult going into summer.
“With the widespread coastal rains winding down, it looks like a wetter weather pattern for the Panhandle and High Plains, more of a late-spring pattern and possibility of severe weather, including high winds, hail and tornadoes for North Texas and drier conditions for the southern half of the state over the next 10 days,” he said.
Rain, rain, go away
Heavy rains delivering double-digit rain amounts over the past month have hurt growing conditions more than helped in other regions, said Greg Grant, AgriLife Extension horticulture agent, Smith County.
Rains have saturated fields in many counties east of Interstate 35 from Corpus Christi to the Red River, making them impossible to enter for weed and pest control or to harvest crops like grain wheat and cool-season forages.
Grant said soggy conditions make harvesting crops like onions difficult and create an ideal environment for plant diseases in crops, gardens, lawns and landscapes. Standing water prevents plants from taking up nitrogen, and some seedbeds or emerged crops were washed away in flooding and will require replanting.
Continued rain events could extend delays to planting and prevent harvesting crops before they degrade or spoil.
“The rain has been mostly bad from a horticultural point of view,” he said. “Producers are missing out on harvests – whether it’s hay bales or tomatoes – and they don’t get those back. Planting time is a short window, and extended delays mean you might miss out. Producers will say they’d prefer too much rain than too little, but these conditions make everything a challenge.”
Local