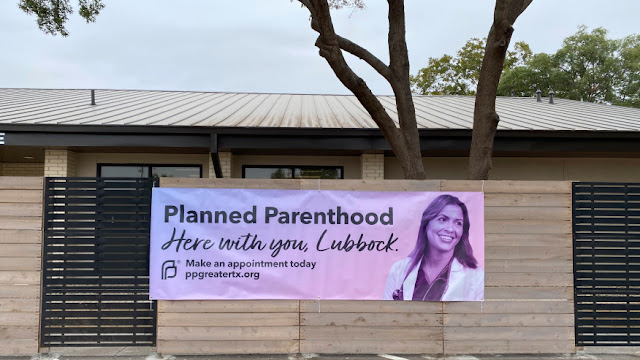 Planned Parenthood sued the City of Lubbock Monday evening to block an abortion ban that deems the city “a sanctuary city for the unborn” in a lawsuit that’s been anticipated since voters approved the measure two weeks ago.
"This ordinance was enacted by the voters of Lubbock through the Charter petition process and the Lubbock City Council certified the election results on May 11, 2021. The City will vigorously defend this ordinance and looks forward to presenting that defense in court.
"Heather Hacker and Andrew Stephens of Hacker Stephens LLP of Austin, and Fernando Bustos of the Bustos Law Firm, P.C., of Lubbock, will represent the City of Lubbock in this lawsuit," the City of Lubbock said in a statement to High Plains Pundit.
Dr. G. Sealy Massingill, of Lubbock, and Planned Parenthood of Greater Texas Surgical Health Services sued the city in federal court in Lubbock, alleging the “Ordinance Outlawing Abortion” violates patients’ due process rights under the Fourteenth Amendment. They say the ban flies in the face of decades-long precedent set in Roe v. Wade and subjects medical workers to the threat of civil lawsuits.
“It imposes substantial liability on anyone who procures, performs, aids, or abets an abortion in Lubbock,” the 15-page complaint states. “It invites any Texas citizen to obtain an injunction against anyone who plans to procure, perform, aid, or abet an abortion. It permits these lawsuits at any time, and bars providers from citing the patient’s consent as a defense.”
The plaintiffs say the ordinance violates state law because the city has no power to create civil liability between private parties.
“Moreover, the ordinance is preempted because the Texas Penal Code already covers the same conduct, and because the ordinance’s imposition of criminal and civil liability is inconsistent with the Texas Penal Code and the Texas wrongful death statute,” the complaint states.
The ballot measure comfortably passed on May 1 with 62% percent of the vote and will go into effect on June 1. It bans all forms of abortion with the exception of when the mother’s life is in danger. Lubbock joins 23 other cities in Texas that have passed similar or identical ordinances at the prodding of anti-abortion groups, becoming the largest city in the state to do so.
Planned Parenthood blasted the ordinance as a “blatant attack” on patient’s constitutional right.
“So we’re suing,” it said in a statement Monday evening. “The city of Lubbock thinks it can ban abortion and defy nearly 50 years of Supreme Court precedent. They’re wrong — and we’ll see them in court.”
The ordinance was passed after Planned Parenthood reopened its Lubbock office in 2020 and began offering services last month. Planned Parenthood was forced to close its previous location in the city after the Texas Legislature passed House Bill 2 in 2013 that required abortion providers to have admitting privileges at a hospital within 30 miles of the medical facility where they work.
Abortion providers in sparsely populated areas of the Panhandle, West Texas and South Texas were forced to close due to a lack of proximity to hospitals. Abortion rights groups quickly sued to block the law, with the Fith Circuit ruling on appeal in 2014 the law was constitutional. The U.S. Supreme Court ultimately ruled in 2016 the restrictions serve no purpose and impose an unconstitutional burden on abortion providers.
“The closure left people in the Lubbock area more than 300 miles from the nearest abortion provider,” the complaint states. “Some to the north or west of Lubbock were even more isolated from abortion providers in Texas.”
The plaintiffs say that even if medical employees were about to successfully defend against a lawsuit filed under the ordinance, the cost of litigating the “barrage” of ensuing lawsuits “would be crushing.”
“Indeed, the ordinance has already forced plaintiffs to cancel abortion-related appointments to avoid potential liability,” the complaint states.
Local