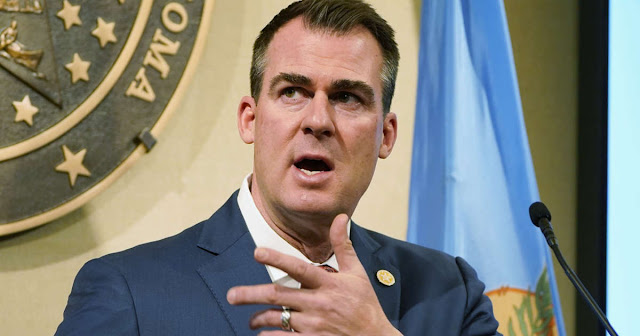 Oklahoma Gov. Kevin Stitt (R) on Friday signed a bill into law that bans the teaching of critical race theory in schools.
In video statement he shared to Twitter, Stitt explained why he signed HB 1775, which prevents the teaching of the academic theory that holds that racism is ingrained in the history of the United States and still impacts laws in place today.
"Now more than ever we need policies that bring us together, not rip us apart," he began his message. "I firmly believe that not one cent of taxpayer money should be used to define and divide young Oklahomans about their race or sex."
Stitt said it's necessary to keep teaching about the country's past and "encourage honest and tough conversations."
"Nothing in this bill prevents or discourages those conversations," he added. "We can and should teach this history without labeling a young child as an oppressor, or requiring he or she feel guilt or shame based on their race or sex."
Stitt concluded his message by quoting Martin Luther King Jr., saying people should be judged by the content of their character instead of the color of their skin.
Oklahoma City Public Schools Board head Paula Lewis, one of the critics of the bill, tweeted her dismay about it being advanced earlier this week, slamming it as an "outright racist and oppressive piece of legislation."
Stitt joins Republican-controlled legislatures in half a dozen states that are working to prevent the theory's teaching in schools.
Amna Akbar, an associate professor of law at the Moritz College of Law at Ohio State University, slammed the efforts as catch-all attempts to suppress conversations around racism.
"The term critical race theory is being used by Republicans in a loose way to capture all sorts of critical thought about the histories and legacies of racism in this country,” said Akbar. "It’s a bogeyman that they’re constructing around critical attention to the history of the country."
Local