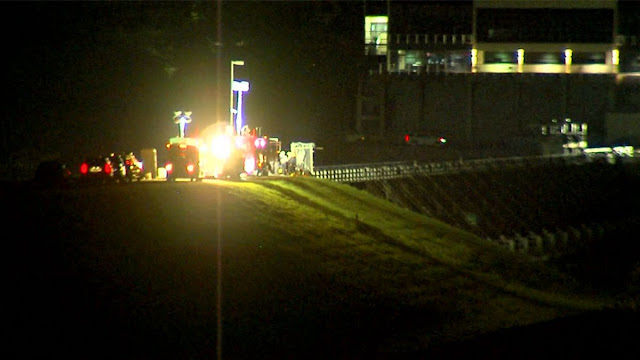 An explosion at a northeastern Oklahoma dam Thursday evening killed two maintenance workers and left a third injured, officials announced.
John Wiscaver, executive vice president of the Grand River Dam Authority (GRDA), said that the two unidentified male workers had been trapped in the Kerr Dam following the explosion at 6 p.m. local time.
Wiscaver told NBC News that the two men were contractors and had been doing routine sample drilling 80 feet below the top of the dam, which is located about 45 miles east of Tulsa, when the explosion occurred.
Authorities began a search for the men, whose bodies were eventually recovered early Friday morning, Wiscaver said in a statement to multiple news outlets.
GRDA spokesman Justin Alberty said that another contractor who was with the men was able to get out following the explosion as the others remained trapped Thursday night.
Alberty said that while the worker initially declined treatment, he was later transported to a nearby hospital for evaluation, NBC reported.
The spokesman added that the structure of the dam itself was not damaged in the explosion, and the cause of the blast remains under investigation.
The identities of the two men killed and the third who was injured have not yet been released to the public.
According to the GRDA’s website, the authority manages more than 70,000 surface acres of water in Northeast Oklahoma, with its dams generating electricity for customers in cities throughout the state and neighboring Kansas.
Local