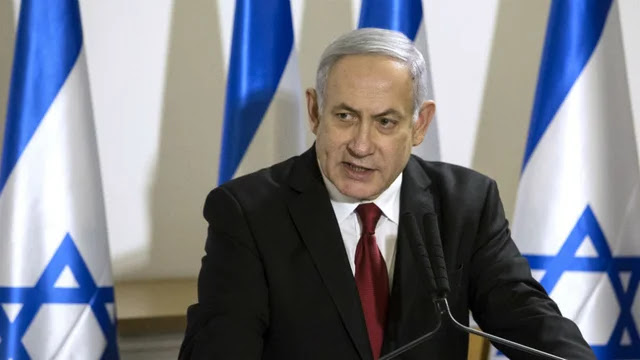 Israeli Prime Minister Benjamin Netanyahu on Wednesday said he is “determined to continue” military operations against Hamas in the Gaza Strip.
His remarks come after an earlier call with President Biden, who told the Israeli premier “he expected a significant de-escalation today on the path to a ceasefire,” according to a readout of the call from the White House.
Netanyahu made his remarks in a video posted to Twitter and filmed outside Israel’s military headquarters in Tel Aviv, the Kirya.
The prime minister said he appreciates the support of Biden for “the State of Israel’s right to self-defense.”
But he continued, “I am determined to continue this operation until its objective is achieved: to restore the calm and security to you, citizens of Israel."
Netanyahu’s remarks raise the risk that military operations against Hamas will continue, even as the Islamic-terror organization has expressed its support for a cease-fire and growing calls from the international community and U.S. members of Congress to immediately halt the violence.
Biden has spoken with Netanyahu four times since May 10, reinforcing the U.S. position that Israel has a right to defend itself but refraining from pressuring the premier into a hard timeline to end its military campaign against Hamas’s military capabilities.
The president dispatched his officials to pursue a “quiet, intensive” diplomacy to restore calm between Israel and Hamas, but also address unrest and violence between Israel and the Palestinians in Jerusalem, the West Bank and across Israel.
But Biden is under pressure as Palestinian civilian casualties in the Gaza Strip top 200, and the United Nations has said that about 58,000 people are internally displaced in the strip, and humanitarian assistance is desperately needed.
Democrats in the House and Senate are increasing their calls for the president to more forcefully demand a ceasefire, and progressives are working to halt a proposed $735 million arms sale to Israel.
Since May 10, Hamas, which controls the strip, and other Islamic-militant groups have fired more than 3,000 into Israel.
Israel has responded by carrying out punishing air strikes destroying more than 800, of what it describes as, “terror targets” and killing more than 130 Hamas terrorists.
Netanyahu has placed the responsibility of Palestinian civilian casualties on Hamas for operating in dense population centers.
In a meeting with 70 foreign ambassadors in Tel Aviv on Wednesday, Netanyahu said that Israel tries to target Hamas with “great precision” but that even such a surgical operation “you don't have the ability to prevent collateral damage around an infected tissue.”
Intercommunal violence between Jews and Arabs in Israel, clashes between Israeli security and Palestinian in Jerusalem and the West Bank, and rocket attacks from Hezbollah in Lebanon into Israel are further complicating efforts to restore calm.
World