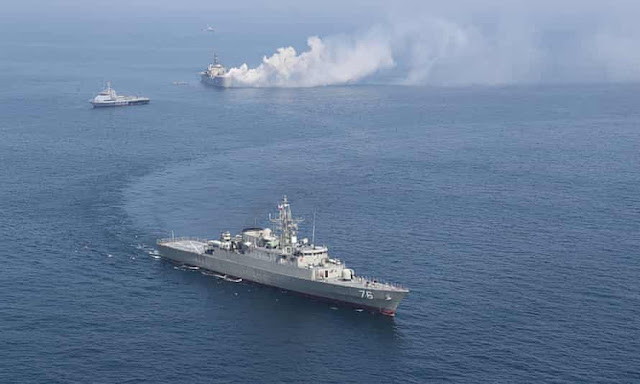 The U.S. Navy on Monday was forced to fire warning shots several times after a group of 13 Iranian ships harassed the American vessels in the Strait of Hormuz, the largest such encounter in more than a year, according to the Pentagon’s top spokesperson.
Islamic Revolutionary Guard Corps Navy (IRGCN) speed boats armed with machine guns “conducted unsafe and unprofessional maneuvers,” approaching U.S. ships “at a very fast speed” as the Navy and Coast Guard boats were escorting the submarine USS Georgia as it was transiting on the surface toward the Persian Gulf, press secretary John Kirby told reporters.
The number of Iranian ships involved is more than quadruple the amount from a similar encounter late last month, when three IRGCN ships harassed U.S. Navy and Coast Guard vessels in the Persian Gulf.
The U.S. military also dealt with a similar incident in early April involving four IRGCN boats.
“It’s certainly more [boats] than we’ve seen in recent past,” Kirby said. “It’s significant and ... that it occurred in the strait, an international chokepoint waterway, that too is significant. And they were acting very aggressively.”
The Iranian armed boats rapidly approached the Navy guided-missile cruiser USS Monterey; patrol coastal ships USS Thunderbolt, USS Hurricane and USS Squall; Coast Guard patrol boats USCGC Wrangell and USCGC Maui; and the guided-missile submarine.
Two of the IRGCN boats broke away from the larger group, moved to the opposite side of the U.S. formation and “approached Maui and Squall from behind at a high rate of speed with their weapons uncovered and manned,” according to a Navy statement released later on Monday.
The two ships “failed to respond to repeated warnings” from the U.S. ones, which used horn blasts and radio warnings to ward off their approach, and got within 300 yards of the vessels before the Maui “exercised lawful de-escalatory measures by firing warning shots.”
The two IRGCN boats didn’t respond and closed to within 150 yards of Maui, at which time the Coast Guard ship fired additional warning shots, according to the statement.
In total, the Maui fired “approximately 30 warning shots on a .50-caliber machine gun” over two rounds of warning fire, Kirby said.
After the second round of warning shots, the 13 Iranian boats “broke contact.”
“Sadly, harassment by the IRGC Navy is not a new phenomenon. It is something that all our commanding officers and crews of our vessels are trained for,” Kirby said when asked whether the IRGCN are trying to provoke the American forces.
“It’s unsafe, it’s unprofessional and this kind of activity is the kind of activity that could lead to somebody getting hurt, and it could lead to a real miscalculation there in the region, and that doesn’t serve anybody’s interest,” he said.
The incident occurred as the Biden administration is in the midst of indirect talks with Iran on reviving the 2015 Joint Comprehensive Plan of Action, the nuclear agreement that former President Trump withdrew the United States from in 2018.
There are signs of progress in the talks, rounds of which have been taking place in Vienna since early April, though Iran reportedly is insisting, among other demands, that the Biden administration lift the terrorism designation on the Islamic Revolutionary Guards Corps, a powerful arm of Iran’s military.
World