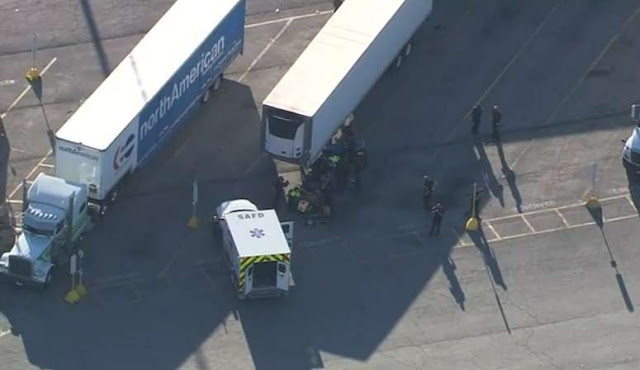 More than two dozen people were recovered from a big rig on Thursday that was stopped near San Antonio, according to several reports.
San Antonio Police Lt. Jesse Salame told reporters that police received a call on Thursday about an 18-wheeler that was on Interstate 10 East, according to The Associated Press.
A San Antonio Park Police officer initiated a traffic stop. As the officer approached the car, several people ran out, according to AP.
Officials made contact with 29 people that fled the truck. According to a local CBS affiliate, both men and women were apprehended.
About 80 to 100 people fled the truck in total, according to KSAT.
A spokesperson for the San Antonio Fire Department told the affiliate that one dehydrated individual was taken to a hospital out of precaution.
The San Antonio Police Department told High Plains Pundit that Immigration and Customs Enforcement’s (ICE) Homeland Security Investigations (HSI) division is taking over the investigation.
In a statement an ICE spokesperson said the division “responded to a call from San Antonio Police Department (SAPD) for assistance on a possible human smuggling event involving a semi-tractor trailer traveling on I-10, east of San Antonio.”
“HSI is following up on the information provided by SAPD. No further details are being released at this time since the criminal investigation remains ongoing,” the spokesperson said.
Texas