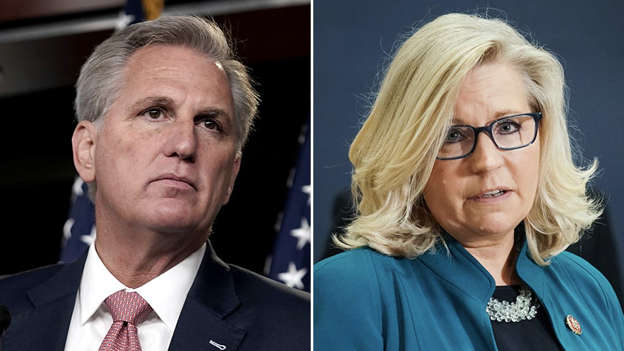 House Minority Leader Kevin McCarthy (R-Calif.) said Monday that he has officially scheduled a vote for Wednesday to oust GOP Conference Chair Liz Cheney (Wyo.) from her No. 3 leadership post.
The widely anticipated vote, which will take place behind closed doors and by secret ballot, comes as McCarthy and his pro-Trump allies have been plotting Cheney’s ouster over the past two weeks as she has continued to condemn former President Trump’s false claims that the 2020 presidential election was rigged and stolen.
McCarthy and other Republicans have argued that Cheney’s comments — at news conferences, in media interviews and in op-eds — have knocked the GOP off message at a moment when the party is trying to unify and win back the House in next year’s midterms.
Cheney, one of 10 Republicans who voted to impeach Trump, has called this moment a "turning point" for the GOP and said refusing to stand up to Trump's lies could lead to more violence like what the country saw during the Jan. 6 insurrection.
“It had been my hope that our driving focus would be taking back the House in 2022 and implementing our Commitment to America. Despite the mainstream media working overtime against us, I believe we still have a great chance to do so. Unfortunately, each day spent relitigating the past is one day less we have to seize the future,” McCarthy said in Monday's letter to House GOP colleagues.
“This is no time to take our eye off the ball. If we are to succeed in stopping the radical Democrat agenda from destroying our country, these internal conflicts need to be resolved so as to not detract from the efforts of our collective team,” McCarthy continued.
“Having heard from so many of you in recent days, it’s clear that we need to make a change. As such, you should anticipate a vote on recalling the Conference Chair this Wednesday," he said.
Trump, McCarthy and Minority Whip Steve Scalise (R-La.) have all endorsed Rep. Elise Stefanik (R-N.Y.), a key Trump ally, to replace Cheney as conference chair once she is successfully ousted.
Some Cheney allies have accused Trump, McCarthy and others of trying to “cancel” Cheney for holding opposing views. But McCarthy tried to push back on that narrative, suggesting that dissenting views are fine so long as they don’t undermine the broader goals of his leadership team.
“We are a big tent party. We represent Americans of all backgrounds and continue to grow our movement by the day. And unlike the left, we embrace free thought and debate,” McCarthy wrote in his letter.
“All members are elected to represent their constituents as they see fit," he said. "But our leadership team cannot afford to be distracted from the important work we were elected to do and the shared goals we hope to achieve. The stakes are too high to come up short. I trust you agree.”
National