McCarthy claims no one 'questioning the legitimacy' of the 2020 election 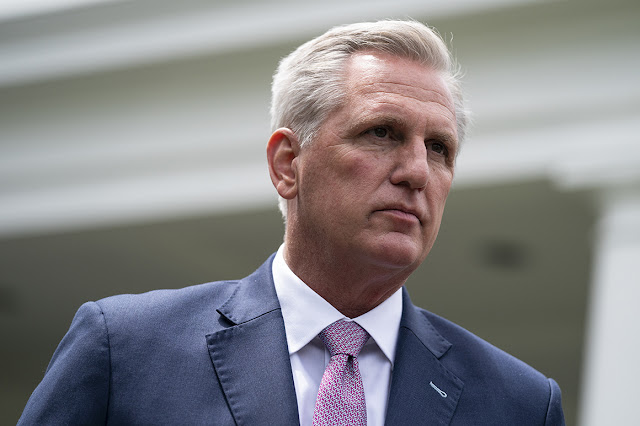 House Minority Leader Kevin McCarthy (R-Calif.) insisted Wednesday that no one in his party is questioning the legitimacy of the 2020 election, hours after House Republicans voted to purge Rep. Liz Cheney (R-Wyo.) from her leadership position for repeatedly calling out former President Trump for his falsehoods about the election being “stolen” from him.
“I don’t think anybody is questioning the legitimacy of the presidential election. I think that is all over with. We’re sitting here with the president today. From that point of view, I don’t think that’s a problem,” McCarthy said following a meeting with President Biden and other congressional leaders at the White House.
McCarthy was among more than 140 Republican members of Congress who voted to overturn state election results after the Jan. 6 insurrection at the U.S. Capitol in which a mob of Trump supporters stormed the building.
McCarthy made the comments Wednesday in response to a question about Republicans’ decision to elevate someone who has questioned the legitimacy of the election to a House GOP leadership position.
Cheney is widely expected to be replaced by moderate Rep. Elise Stefanik (R-N.Y.), a Trump loyalist who has questioned the legitimacy of the 2020 election.
Stefanik has described “election irregularities” and an “unconstitutional overreach” by election officials in the vote last year. Appearing on a recent episode of former Trump aide Stephen Bannon’s podcast, Stefanik backed a controversial GOP-led election audit in Arizona.
Stefanik, like McCarthy, also objected to the certification of results in Pennsylvania after the Jan. 6 riot.
Trump has continued to falsely claim that he won the 2020 election over Biden, despite election officials and Trump’s own Justice Department saying there was not fraud in the election that would have altered the results. Numerous lawsuits challenging results in various states have been thrown out.
The vote removing Cheney from her post as GOP conference chair came during a closed-door meeting Wednesday morning. Republicans voted to oust her by a voice vote, meaning the results were not recorded, but sources told The Hill that the vote to remove her was overwhelming.
Cheney vowed to keep fighting Trump’s false claims in remarks to reporters following the meeting, saying it was imperative Republicans “go forward based on truth.”
“I will do everything I can to ensure that the former president never again gets anywhere near the Oval Office,” Cheney said. “We have seen the danger that he continues to provoke with his language, we have seen his lack of commitment and dedication to the Constitution, and I think it’s very important that we make sure whomever we elect is somebody who will be faithful to the Constitution.”
National