Hey Washington Post, the border crisis is still going on 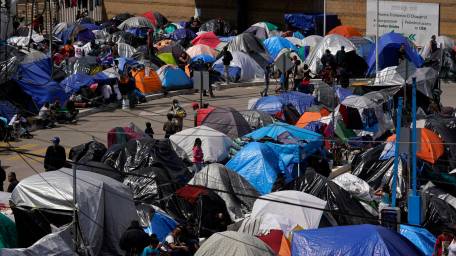 This observation is sort of like shooting fish in a barrel, but it does illuminate how out-of-sight often means out-of-mind in the national political conversation: on May 2, Jen Rubin of the Washington Post wrote a column entitled, “Hey, whatever happened to the border crisis?”
If Rubin had bothered to read the newspaper she works for, she would have learned, “unauthorized crossings along the Mexico border have remained near 20-year highs this month, with slightly fewer unaccompanied minors and family members taken into custody by U.S. agents but more adults arriving than in March.”
The day after Rubin wrote her column, CNN reported, “throughout April, Customs and Border Protection has encountered an average of just under 6,000 people daily at the southern border, according to a Department of Homeland Security official, which is in line with the March average of around 5,560 people daily… During the first three weeks of April, around 122,000 people were encountered by US border authorities on the southwest border, another signal that the month will likely be similar to March, according to preliminary data obtained by CNN.”
Oh, and late April doesn’t look quiet, either:
On April 23, agents near Brackettville, Texas arrested a Mexican national with a prior conviction of Sexual Assault in Tarrant County, Texas. On April 27, agents arrested a Mexican national near Uvalde with a prior conviction for Aggravated Sexual Assault of a Child in San Antonio, Texas. The next day, Uvalde Station agents arrested a Honduran man with a prior conviction for Sexual Assault out of Phoenix, Arizona.
Agents disrupted 69 smuggling cases attempting to smuggle 364 migrants further into the U.S. throughout sector and made 4,640 apprehension in the past seven days. Del Rio Station agents had multiple instances where they apprehended over 100 individuals at one time.
And that’s just one small stretch in one week. The El Paso office arrested 27 wanted people in a one-week span for outstanding warrants for crimes including multiple sexual assault/abuse of a child charges, aggravated assault, larceny, robbery, prostitution, fraud, possession of heroin, marijuana smuggling, forgery of financial instruments, and possession with intent to distribute cocaine.
Wait, there’s more in the Post, from the Associated Press:
A tractor-trailer slams into an SUV at an intersection on a remote California desert highway, killing 13 of 25 people crammed inside the late model Ford Expedition.
A man dangles a toddler over a border wall near Santa Teresa, New Mexico, allowing her to fall on her face before he disappears into Mexico.
A 40-foot (12.2-meter) cabin cruiser overloaded with 32 people capsizes just off the San Diego coast, killing three and critically injuring another person. The others aboard survived, with one in critical condition.
The incidents, which occurred over the last two months, show how smugglers put migrants at extraordinary peril for profits, whether by car, on foot or at sea.
We will find out how many enforcement encounters the U.S. Customs and Border Protection had in the month of April in a couple of days, but it’s looking like it’s going to be in the neighborhood of March’s 172,331 — a 71 percent increase over February 2021 and the highest level in one month in nearly 20 years.
Nothing happened to the border crisis. It’s still going on, day after day. The only thing that changed was that the national media stopped talking about it quite as often and as loudly as it did earlier in the year.
Opinion