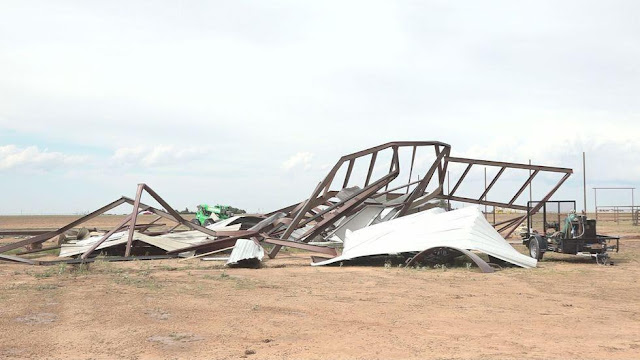 Wednesday night’s tornado between Cotton Center and Hale Center touched down within miles from where thousands of people live. While the severe weather wasn’t deadly, it affected many ranchers and farmers in the area.
Kerry and Jill Winders live about 10 miles north of Cotton Center. They took shelter from the storm Wednesday night, and Thursday morning awoke to destruction. Their new barn, ripped apart before it was even finished, stretched a mile across an open field.
Meteorologist Adam Young has been at the forefront of several severe storms. He says the South Plains has gotten very lucky multiple times in the last few weeks.
“We do have a lot of people that, to be frank, don’t necessarily know what’s going on out there and they could be putting themselves in harm’s way, but also putting the people that are out there doing it for work or doing it to help keep the public safe as we’re doing,” Young said.
The tornado damaged power lines, trees and pivots in the area. Daniel Smith, owner of South Plains Irrigation, says he’s been getting phone calls all day. He says there’s 40 to 45 pivots down in two counties.
“Lots of rotation, funnels, tails dropping down out of the clouds, wind changing directions every five to ten minutes. Take your warnings seriously when you get them,” Smith said.
During his more than 30 years on the job, Smith says this storm ranks in his top five in terms of damage.
Local