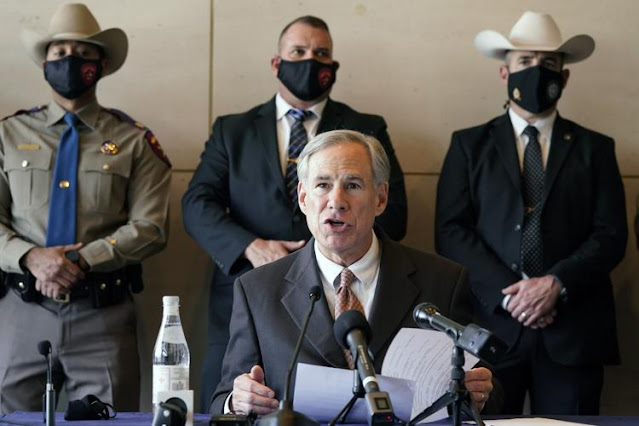 By Bethany Blankley
Gov. Greg Abbott gave Americans a view of the Texas border area being breached every day by cartels and human smugglers in an interview on Sunday with Fox News’ Maria Bartiromo. Flying above the Rio Grande River, he said 2,000 people are entering Texas every day in rafts, boats, and through gaps in the unfinished border wall.
Abbott said known criminals are entering Texas and the U.S. illegally as a result of the Biden administration’s open border policies. In the month of March alone, the Texas Department of Public Safety made 598 criminal arrests and 16,000 referrals to U.S. Border Patrol. Many being arrested are known criminals, sex-offenders and gang members, he said.
Abbott said the Biden administration's border policies “have created an open season for human traffickers, for drug smugglers, for drug cartels and gangs.
"These criminals are preying upon women and children exposing them to abuse and to terror," he continued. "Because the federal government is failing to respond to these dangers,” Abbott created Operation Lone Star in March. The operation involves DPS, Texas Rangers, the Texas National Guard and other members of law enforcement who are working to prevent human and drug smuggling, but a lot of criminals are getting away because the volume of criminal activity is overwhelming law enforcement, the governor said.
“It used to be that most of the illegal crossings of the border occurred at nighttime,” Abbott said. “But under this administration it occurs in higher volume during the daytime,” he said as the camera recorded scores of individuals walking across the border in broad daylight.
Abbott pointed to where the border wall has not been completed along the Rio Grande River. The wall construction is already paid for and delivered materials are lying on the ground, he notes, but the Biden administration halted the completion of the wall.
The Texas border with Mexico is 1,254 miles. The U.S.-Mexico border is 1,933 miles long. The Texas border is not a straight-line desert border like Arizona’s, Abbott notes. It’s much harder to navigate and patrol across tough terrain, the Rio Grande Valley and river and other harsh environmental conditions.
Abbott said neither the president nor the vice president has had any contact with him and that the president “doesn’t care about the border.” The administration “does not want to resolve the challenges we have on the border,” he added. “The first 100 days of the Biden administration have been great for the gangs, the cartels, for the human traffickers who have been exploiting the border.”
The financial cost to Texas is expected to exceed $1 billion, Abbott said, for “the state to secure the border of the United States of America.”
But the cost to the United States is greater, he adds.
"The border comes to the rest of America every single day, because criminals are transporting drugs and people to every state," he said.
In March, Homeland Security Secretary Alejandro Mayorkas disclosed that the surge at the US-Mexico border is likely the worst it has been in 20 years. Refusing to call the situation a “crisis,” he said, “[w]e are on pace to encounter more individuals on the southwest border than we have in the last 20 years.”
Bartiromo reported that the cartels are making $400 million monthly from Biden’s policies, charging $4,000 per person to cross the border, taking 2,000 people a day, and in some places more. One border patrol guard apprehended a group from China, including individuals like scientists, engineers and doctors who each paid $50,000 to be brought into Texas illegally, she reported.
“You have to ask why the CCP is sending these people to the border,” she said. “Obviously they don’t want to be noticed. What are they doing when they get here?”
Abbott replied, “Could be espionage. If there are still people out there who think these are just people coming from Mexico or Central America coming here to engage in agricultural [work]… they are forgetting about the people from China, from Iran, from terrorist-based nations,” who are not being apprehended but released into the general population.
Once the more than 100,000 people entering the U.S. illegally every month are processed by Border Patrol, they are released into the country, given airfare and bus tickets, most are enrolled in the Refugee Resettlement Program and given a pathway to citizenship, the Biden administration has announced, referring to this approach as compassionate.
In February 2020, Customs and Border Protection encountered 36,687 illegal immigrants; by February 2021, agents encountered 100,441, and in March 2021, encountered 171,700.
Texas Attorney General Ken Paxton has sued the Biden administration five times over immigration and says the lawsuits will continue because the Biden administration continues to break the law.
Texas