George Floyd's brother on anniversary of murder: 'I think things have changed' 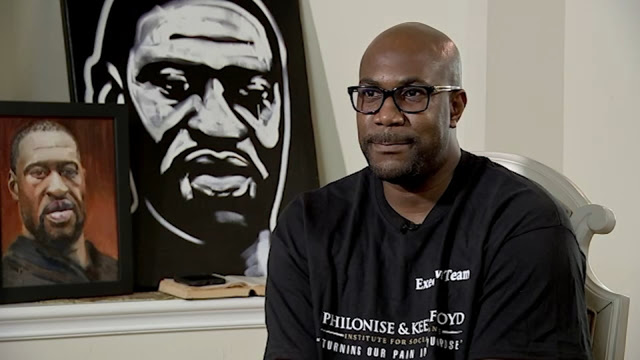 Philonise Floyd, the brother of George Floyd, on Tuesday, said he thinks things have changed in the nation since the police killing of his brother last year.
Floyd made the comments during an appearance on CNN’s “New Day,” where he was discussing the issues of racial injustice in the year since his brother’s passing at the hands of Minneapolis police officer Derek Chauvin.
“I think things have changed,” Floyd said. “I think it’s moving slowly, but it’s making progress.”
“I just want everything to be better in life because I don’t want people dying the same way my brother has passed,” he continued.
Video of George Floyd’s death went viral last year and sparked months of demonstrations against racism, and calls for police reform. Chauvin knelt on his neck for more than nine minutes.
Chauvin was convicted of murder and manslaughter in the killing and is scheduled to be sentenced next month. Three other officers at the scene — Thomas Lane, J. Kueng and Tou Thao —  are facing charges of aiding and abetting murder and manslaughter.
All four officers are also facing federal charges for violating Floyd’s constitutional rights.
Floyd’s comments come ahead of the family’s slated Tuesday meeting to mark the anniversary of George Floyd's death with President Biden at the White House.
Biden had pushed for the passage of the George Floyd Justice in Policing Act by Tuesday. The proposal would ban chokeholds by federal officers, end legal protections for law enforcement against civil lawsuits and create national standards for policing.
The House has passed the measure, but it faces an uphill battle in the Senate.
Sens. Cory Booker (D-N.J.) and Tim Scott (R-S.C.) and Rep. Karen Bass (D-Calif.), the trio of lawmakers leading police reform negotiations, said Monday that they “remained optimistic” about coming to a compromise.
Floyd told CNN that passing police reform would be one of “the best things that you can pass across America.”
“When you see a police officer, you see somebody that you respect, somebody that's out there serving America and they’re supposed to make sure that you’re okay,” Floyd said. “But when an officer takes somebody’s life, to me that’s not a mistake because a mistake can be erased. You can’t get that person back and that family will have to go through what we went through for an entire year.”
National