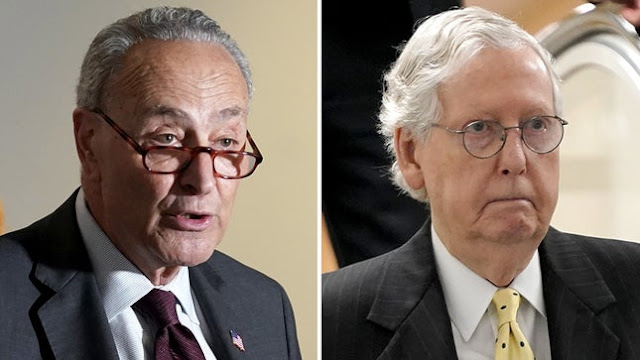 The Senate is heading for its first filibuster fight of the year over creating a commission to probe the Jan. 6 attack, reviving frustration over the procedural roadblock.
The bill, which could come up as soon as this week, appears poised to fail absent a significant shift among Senate Republicans, as a growing number of GOP senators follow Senate Minority Leader Mitch McConnell’s (R-Ky.) decision to oppose the legislation.
It would be the first time Republicans have successfully used the Senate’s rulebook to block a bill viewed by Democrats as a big priority in the wake of the Jan. 6 attack on the Capitol, where a pro-Trump mob breached the building as then-Vice President Mike Pence and lawmakers were counting the Electoral College vote.
The stalemate is reviving questions for Democrats about what, if anything, can pick up the 10 GOP votes needed for most legislation to pass the Senate.
“They have been careful to not have any major confrontation on the filibuster yet in this session of the Senate, but inevitably as we get into more difficult issues we may have to face it,” said Sen. Dick Durbin (Ill.), the No. 2 Senate Democrat.
Sen. Brian Schatz (D-Hawaii) tweeted that blocking the House bill would only inadvertently make the argument for reform advocates.
“Filibustering a bipartisan commission regarding the January 6 insurrection is a three dimensional way to make the point that the filibuster is primarily a destructive force in American politics,” he said.
The Jan. 6 bill is the one of several items on the Senate’s agenda during a crucial summer period that could spark deep tensions over the 60-vote legislative filibuster and build pressure for Democrats to unify behind nixing it.
The filibuster has largely laid dormant for the first four months of Biden’s administration, with Democrats using reconciliation to squeak through a $1.9 trillion infrastructure package and the Senate focused on nominations, which can pass without GOP support, and smaller, bipartisan bills.
But it’s roaring back to life, with McConnell also sending a warning signal that Republicans want additional votes on changes to a bill to compete with China before Democrats start to wrap up debate, a move that would require at least 10 GOP votes.
Senate GOP leadership hasn’t formally announced that they will block the Jan. 6 commission bill on the floor. But Sen. John Thune (R-S.D.), asked Monday if it was unlikely 10 Republicans would vote for the bill, said, “I think that would be true in its current form.”
Senate Majority Leader Charles Schumer (D-N.Y.) has vowing to bring the measure to the floor “very soon.”
“I’m sorry that some Republicans believe that a bipartisan investigation of the attack on our democracy is inconvenient for the midterm campaigns, but the Democratic-led Senate ... is not going to sweep Jan. 6 under the rug. We’re going to vote on the Jan. 6 commission in the Senate, and the American people will see where every member stands — on the side of truth or on the side of Donald Trump’s big lie,” Schumer said.
Republicans senators say they expect the House bill, which won 35 GOP votes in the lower chamber, will fail in the Senate.
“Probably, it will,” said Sen. Mike Rounds (R-S.D.), who is a “no” on the bill as it is currently drafted.
Another Republican said that while there hadn’t been any arm-twisting by leadership to oppose the bill, senators were “reading the tea leaves” on the bill’s chances.
Every Democrat is expected to vote for the legislation, but there doesn’t appear to be a path to getting 10 GOP votes and defeating the legislative filibuster.
Sen. Susan Collins (Maine), one of seven GOP senators who voted to convict former President Trump for inciting the mob on Jan. 6, told ABC News that she was “optimistic” they would be able to overcome their differences and get a deal on establishing a commission.
“I strongly support the creation of an independent commission,” Collins said. “I believe there are many unanswered questions about the attacks on the Capitol on Jan. 6.”
She added to reporters on Monday that she’s started discussing the issue with her GOP colleagues, and briefly with Senate Democrats, but not members of leadership.
And Durbin said he would be willing to talk with Collins, who he said he believed was working in a “good faith” effort to create a commission.
But Democrats can’t even count on all seven GOP “convict” votes to back the commission.
Sen. Richard Burr (R-N.C.), one of the seven, announced that he would oppose the House bill, arguing it would undercut an ongoing Senate probe.
“These investigations are being led by the committees with jurisdiction, and I believe, as I always have, this is the appropriate course. I don’t believe establishing a new commission is necessary or wise,” he said.
Beyond Collins, only Sens. Mitt Romney (R-Utah) and Bill Cassidy (R-La.) have sounded actively interested in the House-passed bill.
That leaves Democrats substantially short of the 10 votes they need.
The two biggest sticking points for Republicans is how staff would be hired and the time frame.
The House bill mirrors language from legislation that created the 9/11 commission on staffing, but Republicans are worried that Democrats will be able to hire staff even though the membership on the panel is evenly split.
The bill also includes language that would end the committee by the end of the year.
But, underscoring the growing politicization in Congress, Republicans are warning of deep skepticism that Democrats aren’t just looking for a cudgel heading into 2022.
“The process has been hijacked,” said Sen. John Cornyn (R-Texas). “I think it’s a moot issue from my perspective because we can just do this through the standing committees.”
Sen. Marco Rubio (Fla.), the top Republican on the Senate Intelligence Committee, added in a video he posted about the bill: “It’s designed to be used as a partisan political weapon.”
National