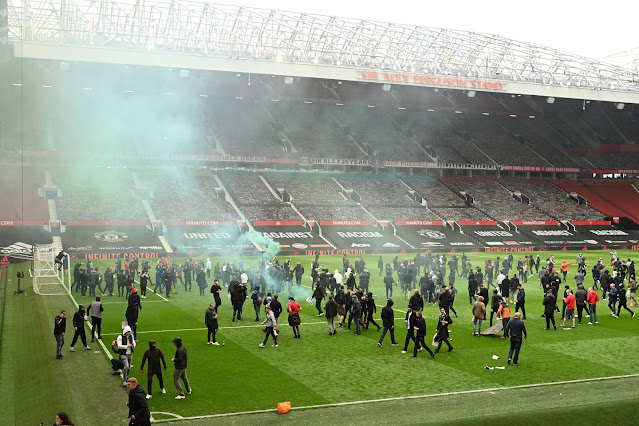 A Premier League match was abruptly postponed Sunday after a group of angry fans stormed the field in protest, causing violence and damaging property, according to The Guardian.
The match between clubs Manchester United and Liverpool was supposed to start at 4:30 p.m., but around 1:00 pm a group of protesters started to gather around the stadium holding banners and voicing disapproval of Manchester United's U.S.-based owners, the Glazer family, according to the Guardian.
Protesters stormed the field at Old Trafford around 2:30 p.m. They started to throw flares and shoot firecrackers onto the field. One protester was seen hanging on the goalstand and another one grabbed the corner flag. Protesters also clashed with police outside of the field, where two police officers were injured after having bottles thrown at them, with one being sent to the hospital suffering a slash on his face, according to the Guardian.
Manchester police told the Guardian another group of protesters tried to breach the field again and another lockdown had to be enforced, and that some protesters became “violent and antagonistic.”
The stadium went on lockdown at 3:00 p.m. with both teams still at their hotels waiting for the start of the match an hour and a half later. The match was officially postponed at 5:40 p.m.
Manchester United fans were protesting against the Glazer family, who also own the NFL’s Tampa Bay Buccaneers for joining the proposed European Super League, which drew widespread criticism from fans and pundits.
Recently, other Premier League club fans have started seeing their own protests, including Arsenal, where fans demanded American owner Stan Kroenke be removed from ownership of the team.
All six Premier League teams have left the now defunct Super League.
World