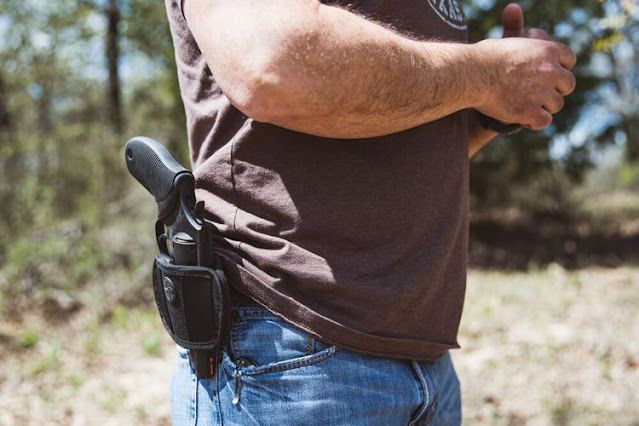 By Bethany Blankley
Texans would no longer need a state license to carry a handgun, either concealed or openly, under a bill approved by the state Senate and House, and an agreement reached in conference committee.
The bill, HB 1927, initially passed the House, and later passed the Senate with amendments. Because the House refused to concur with the Senate’s amendments, the bill went to a conference committee comprised of five House and five Senate members to hash out differences.
The 10 legislators announced that they have reached a full agreement on the bill, which is now expected to pass both chambers this week. Gov. Greg Abbott says he will sign the bill.
Once he does, Texas would become the 21st state to adopt a constitutional carry law. Texas is one of the only Republican-led states that has not passed a constitutional carry bill.
In constitutional carry states, residents can legally carry a firearm without a license or any other government-applied restriction, ConcealedCarryStates.org explains.
Vermont has never restricted the right for adults to carry a firearm. Alaska was the first state to rescind its concealed carry permit requirement in 2003.
Abbott said that constitutional carry was a priority legislative item this year and declared that Texas would become a sanctuary state for the Second Amendment after 20 states have already passed constitutional carry laws.
Current Texas law requires individuals to obtain a license and pay a fee in order to carry a handgun, which Sen. Charles Schwertner, R-Georgetown, says, restricts Texans’ Second Amendment rights. Schwertner filed the House’s companion bill in the Senate.
"HB 1927 would recognize the United States Constitution as our permit to carry and allow all law-abiding adults, aged 21 years or older, to carry a handgun for the protection of themselves or their families, in public places, in a holster, without the requirement of a state-issued license,” Schwertner said.
Last month, Lt. Gov. Dan Patrick, who heads the Senate, said he didn’t have enough votes among Senate Republicans to pass the bill. After the Capitol switchboard was inundated with calls from Texans, Patrick scheduled the bill for a vote.
Ultimately, the Senate passed the bill with amendments. Patrick says the bill “affirms every Texan’s right to self-defense and our state’s strong support for our Second Amendment right to bear arms. In the Lone Star State, the Constitution is our permit to carry.”
The bill does not change who can legally possess or purchase a firearm under state or federal laws.
"People who are prohibited from possessing a handgun will still be prohibited from possessing a handgun under this bill," Schwertner says. "Nothing in this bill regarding possession is changed.”
The bill also does not change existing laws governing firearms. It does not affect protected areas where carrying is currently prohibited, nor does it change the laws governing sales or purchases of handguns or long guns. Laws allowing private property owners from barring the carrying of weapons on their own premises are still in effect. Those with felony convictions or who are under protective orders for domestic violence would still remain barred from carrying a firearm.
Democratic Sen. Sarah Eckhardt of Austin, who opposes the bill, argued that of the 2,269 license-to-carry applications rejected in 2020, 926 were for past criminal history.
"We won't have that filter anymore without the license," she said.
But Schwertner argues that the increased criminal penalties for illegal carry amended into the bill will serve as a deterrent and increase public safety.
“To me, this bill is about two things: the advancement of self-defense, and a belief in – and trust of – law-abiding citizens to avail themselves of their Second Amendment right to self-defend by carrying a sidearm,” he said. “I think this is an advancement that is going to improve safety both for the individual and society at large.”
Texas