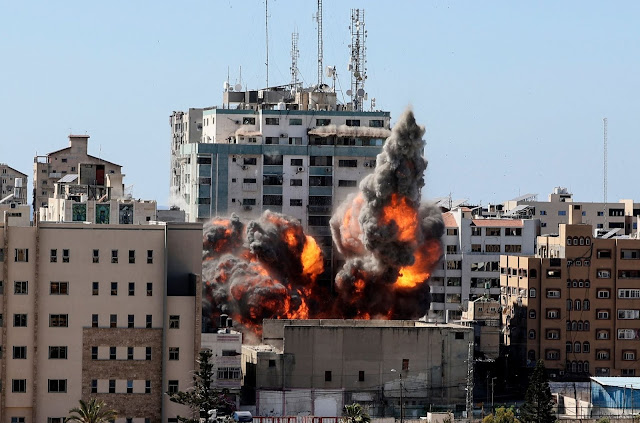 Israeli forces bombed a building that housed The Associated Press and Al Jazeera in Gaza City on Saturday, the news outlets reported, amid the latest round of air strikes in the area.
The AP reported that the entire 12-story building collapsed. Al Jazeera shared a 50-second clip on Twitter of the building crumbling after it had been hit.
The Israeli Defense Forces (IDF) defended such strikes on Twitter, saying Hamas has "placed military assets" inside high-rise buildings for intelligence gathering, communication and other purposes.
"The Israel Defense Forces struck a number of such buildings in recent days, but before we did so, we took steps to try and ensure that civilians would not be harmed," the IDF wrote on Twitter.
"All the multi-story buildings targeted by the IDF were used for military purposes within each building," the Israeli military added.
AP President and CEO Gary Pruitt said in a statement that the news outlet was "shocked and horrified" that the military would target the building, adding that it was seeking information from the Israeli government and U.S. State Department.
"This is an incredibly disturbing development. We narrowly avoided a terrible loss of life," Pruitt said. "A dozen AP journalists and freelancers were inside the building and thankfully we were able to evacuate them in time."
"The world will know less about what is happening in Gaza because of what happened today," Pruitt continued.
The Hill has reached out to Al Jazeera for comment.
The AP reported about an hour before the strike that Jawwad Mahdi, owner of the high-rise, said he received a call from the military warning that the building would be a target.
Madhi said he was told he had an hour to make sure everyone had left the building. After being told of the warning, AP staffers and other residents of the building “fled in a panic,” the news outlet wrote.
The AP later reported that the army had told the news organization that its staff should evacuate.
The strike came as violence between Israel and Hamas continued to escalate on Saturday, after Hamas launched rockets into Israel earlier this week.
According to CNN, more than 2,000 rockets have been fired toward Israel from Gaza since Monday.
Israel has launched a series of retaliatory strikes, with the AP reporting earlier Saturday that an air raid on a three-story house in a refugee camp killed 10 people, including eight children.
The strike was reportedly the single deadliest strike since violence erupted earlier this week.
The Palestinian Health Ministry said Saturday that 139 Palestinians have been killed, including 39 children and 22 women, as a result of the ongoing strikes, while 1,000 people have been wounded.
World