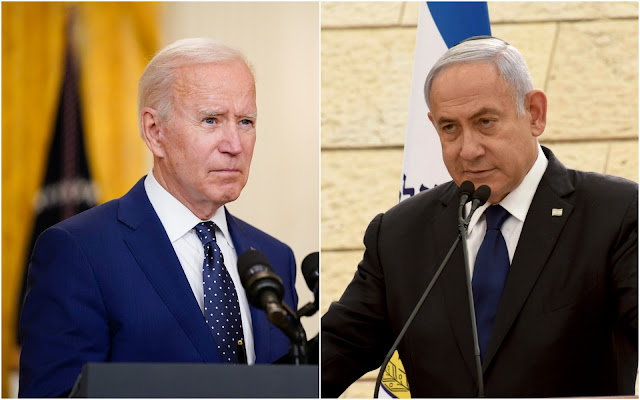 President Biden and Israeli Prime Minister Benjamin Netanyahu spoke again Saturday as violence between Israel and militants in the Gaza Strip continues to escalate.
The president "raised concerns" about the safety of journalists in the region.
According to a readout of the call released by the White House on Saturday afternoon, Biden "reaffirmed his strong support for Israel’s right to defend itself against rocket attacks from Hamas and other terrorist groups in Gaza" and "raised concerns about the safety and security of journalists and reinforced the need to ensure their protection."
"He expressed his support for steps to enable the Palestinian people to enjoy the dignity, security, freedom, and economic opportunity that they deserve and affirmed his support for a two-state solution. The leaders agreed to continue the close consultation between their teams and to remain in touch in the days ahead," the White House said.
The call came after Israel faced pushback over its targeting of a high-rise in Gaza that housed journalists from The Associated Press, Al Jazeera and other networks. Video of the building collapsing spread across the internet, drawing condemnations from journalists and concerns from the White House.
The Israeli Embassy in Washington, D.C., also released a readout of the call between the two world leaders. The statement said that Netanyahu updated Biden on the actions the Israeli military has taken. Netanyahu thanked Biden for his “unreserved” support for Israel and maintained Israel is striving to avoid civilian casualties as the fighting balloons.
Netanyahu did not address the attack on the high-rise building specifically, according to the embassy's readout, but maintained that Israel provides warnings in advance of when it strikes such towers. The Israeli military said Saturday that it gave the owner of the building an hour’s notice before the airstrike.
The conversation marked the second time Biden and Netanyahu have spoken since violence broke out in the Gaza Strip and across Israel.
Biden also spoke with Palestinian Authority President Mahmoud Abbas as violence in Gaza spills over into protests in the West Bank.
"President Biden updated President Abbas on U.S. diplomatic engagement on the ongoing conflict and stressed the need for Hamas to cease firing rockets into Israel. They expressed their shared concern that innocent civilians, including children, have tragically lost their lives amidst the ongoing violence. The President expressed his support for steps to enable the Palestinian people to enjoy the dignity, security, freedom, and economic opportunity that they deserve," Biden said, according to a White House readout.
Nearly 2,000 rockets have been fired from Gaza at Israel this week, and Israel has responded with punishing strikes of its own from jets and ground troops massed at the border.
According to CNN, more than 2,000 rockets have been fired toward Israel from Gaza since Monday. The Palestinian Health Ministry said Saturday that 139 Palestinians have been killed, including 39 children and 22 women, in retaliatory airstrikes.
The mushrooming death toll has sparked alarms from lawmakers in the U.S., including many who have voiced support for Israel throughout the conflict.
Sen. Bob Menendez (D-N.J.), the chairman of the Senate Foreign Relations Committee, said he is “deeply troubled by reports of Israeli military actions that resulted in the death of innocent civilians in Gaza as well as Israeli targeting of buildings housing international media outlets.”
“In response to thousands of rocket attacks fired by Hamas aimed at civilians, Israel has every right to self-defense from terrorists committed to wipe her off the face of the map.  But no matter how dangerous and real that threat may be, I have always believed the strength of the U.S.-Israeli relationship flourishes when it is based on the shared values of democracy, freedom, pluralism, and respect for human rights and the rule of law,” he said in a statement.
Among the most vocal critics of the Israeli campaign have been progressives in the U.S.
Sen. Bernie Sanders (I-Vt.), a leading liberal in the Senate, published an op-ed Friday accusing Netanyahu of cultivating “an increasingly intolerant and authoritarian type of racist nationalism” and added that U.S. policy toward Israel should be more even-handed between the Palestinians and Israel.
“We can no longer be apologists for the right-wing Netanyahu government and its undemocratic and racist behavior,” he wrote. “We must change course and adopt an evenhanded approach, one that upholds and strengthens international law regarding the protection of civilians.”
World