Biden calls for 'significant de-escalation' in call with Netanyahu 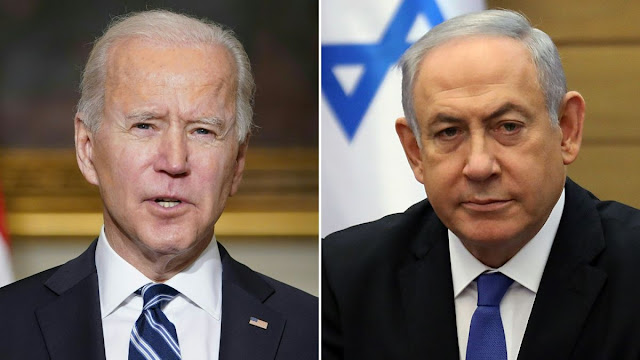 President Biden told Israeli Prime Minister Benjamin Netanyahu that he expects a “significant de-escalation” in the violence between Israel and Hamas by Wednesday to put the two sides "on the path to a ceasefire," according to a readout of the leaders' Wednesday morning call released by the White House.
“The two leaders had a detailed discussion on the state of events in Gaza, Israel’s progress in degrading the capabilities of Hamas and other terrorist elements, and ongoing diplomatic efforts by regional governments and the United States,” the White House said in the readout. “The President conveyed to the Prime Minister that he expected a significant de-escalation today on the path to a ceasefire.”
Wednesday was the first time that Biden set a deadline on when he would like to see a reduction in the latest violence, which has persisted in the Middle East for more than a week and led to Israeli and Palestinian civilian deaths. Biden has previously expressed support for a cease-fire in the region, after officials stopped short of doing so publicly.
In comments hours after the phone call, Netanyahu said he is “determined to continue this operation until its aim is met,” a strong indication that Biden’s words did not have their desired effect.
Biden has come under growing pressure from some progressive Democrats to take a harder line against Israel for its role in the conflict. During a trip to Michigan on Tuesday, Rep. Rashida Tlaib (D-Mich.), the first Palestinian American woman to serve in Congress, pressed Biden to do more to protect Palestinian lives and stand up to what she says are Israeli crimes against Palestinians.
Speaking to reporters aboard Air Force One before Netanyahu’s own remarks, White House principal deputy press secretary Karine Jeanne-Pierre would not say whether Netanyahu gave Biden any assurances. She also did not elaborate on why the administration set the deadline of Wednesday for a reduction of violence or what recourse the U.S. has if Biden’s call is not heeded.
“Our focus has not changed. We are working towards a de-escalation ... to a sustainable calm,” Jeanne-Pierre said. “Our approach is to make sure that we do this quietly, intensively, in a diplomatic way.”
“He wants to be on a path to a cease-fire. That is what he is calling for,” she later added.
Wednesday’s call was Biden’s fourth with Netanyahu over the course of a week. The readout was the first to say publicly that Biden called on Netanyahu to alter the Israeli military’s approach and allow for de-escalation. The White House previously stated that Israel maintained the right to defend itself.
The Israeli military has conducted hundreds of airstrikes against what it says are Hamas targets in Gaza over the past week. Hamas has fired more than 3,000 rockets at civilian targets in Israel. There have been dozens of civilian deaths among Israelis and Palestinians, including children.
Netanyahu has vociferously defended the Israeli military’s actions, including an airstrike that toppled a Gaza building housing The Associated Press over the weekend, and said that the military campaign would continue in order to degrade Hamas militants’ capabilities.
Beyond carefully worded readouts of calls, the White House has adopted a behind-the-scenes approach to trying to tamp down the conflict in the Middle East.
Biden administration officials have held more than 60 calls with Israeli, Palestinian and other regional partners like Egypt, which has relations with Hamas, over the past week, according to the White House.
World