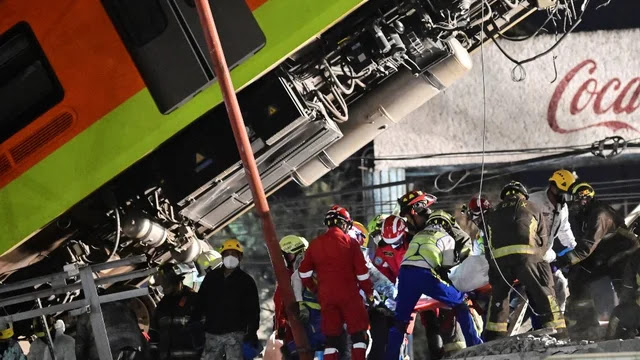 A portion of the Mexico City subway system collapsed late Monday, killing at least 23 people and injuring around 70 others.
Rescuers searched a car that was dangling from an overpass for anyone who might be trapped for hours, The Associated Press reports, but the effort was halted early Tuesday due to safety concerns.
“We don’t know if they are alive,” Mexico City Mayor Claudia Sheinbaum said of anyone who may be trapped inside the car. According to Sheinbaum, one person had been pulled alive from the car and 49 of the injured people were hospitalized. Seven people were in serious condition and undergoing surgery.
"There are unfortunately children among the dead,” Sheinbaum added. According to the mayor, a support beam gave way as the train was passing over it.
The line on which the crash occurred, Line 12, is the newest part of Mexico City's subway system, the AP notes. It mostly runs underground, but travels on elevated concrete around the city's outskirts.
The AP notes that the Mexico City system has had at least two other serious incidents since it began operating around 50 years ago. A collision between two trains in 2020 left one person dead and 41 injured. In another incident, 12 people were injured when a train crashed into another.
This incident could be damaging for Mexican Foreign Relations Secretary Marcelo Ebrard, who was mayor of Mexico City when Line 12 was built, the AP noted, adding that soon after Ebrard left office, allegations of poor design and construction about the subway line arose.
"What happened today on the Metro is a terrible tragedy," Ebrard tweeted.
“Of course, the causes should be investigated and those responsible should be identified,” he added. “I repeat that I am entirely at the disposition of authorities to contribute in whatever way is necessary.”
World