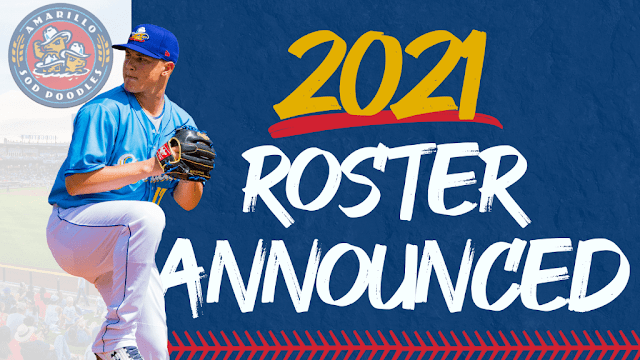 The Arizona Diamondbacks, MLB parent club of the Amarillo Sod Poodles, unveiled their initial Double-A roster for the 2021 season today. The Sod Poodles will open the season with six of Arizona’s top 30 overall rated prospects, including No. 3-rated SS Geraldo Perdomo, No. 4-rated outfielder Alek Thomas, and No. 12-rated RHP Tommy Henry. Perdomo, third baseman Ryder Jones and RHP Humberto Mejia enter the 2021 season with previous Major League experience. The Sod Poodles roster also includes two native Texans, Camden Duzenack and Stone Garrett.
The initial 2021 Amarillo Sod Poodles roster breaks down as follows:
PITCHERS (14): RHP Edgar Arredondo, RHP Jeff Bain, RHP Luis Castillo, LHP Matt Gage, LHP Junior Garcia, LHP Tommy Henry, LHP Tyler Holton, LHP Mack Lemieux, RHP Justin Lewis, RHP Humberto Mejia (40-man Roster), RHP Chester Pimental, RHP Brandyn Sittinger, RHP Justin Vernia, RHP Ryan Weiss
CATCHERS (3): Jose Herrera, Dominic Miroglio, Jarett Rindfleisch
INFIELDERS (6): Luis Basabe, Jancarlos Cintron, Camden Duzenack, Stone Garrett, Ryder Jones, Geraldo Perdomo (40-man Roster)
OUTFIELDERS (3): Dominic Fletcher, Jake McCarthy, Alek Thomas
No. 3-rated Perdomo enters the 2021 season as the third-best prospect and best defensive prospect in the Arizona Diamondbacks’ organization according to MLB.com. He made his MLB debut earlier this season on April 3 and earned his first career MLB hit on April 6 at Colorado. Perdomo spent the 2020 season at the D-backs’ Alternate Training Site. In 2019, he finished second among all D-backs’ minor leaguers in walks (70) and fourth in stolen bases (26). The Dominican native played in 116 games between Single-A Kane County and High-A Visalia and finished the year with more walks (70) than strikeouts (69) for the second time in his career.
No. 4-rated Thomas enters the 2021 season as the fourth-best prospect in the Arizona Diamondbacks’ organization and the No. 71 prospect in all of baseball, according to MLB Pipeline. He was selected 63rd overall in the 2018 June draft out of Mount Carmel High School (Chicago, IL). The 2019 season was his first full season as a professional and he combined to hit .300 (23 2B, 7 3B, 10 HR, 55 RBI) in 114 games between Single-A Kane County and High-A Visalia. The Illinois native led the Midwestern League in hits (110), SLG (.479), OPS (.872), and was second in AVG (.312) during his 91 games with Kane County. Thomas helped the Rawhide win the 2019 California League Championship after hitting .333 (9-for-27) with five doubles, three RBI, and five runs scored during the postseason. He was named a Baseball America Low-Class-A All-Star, an Arizona Diamondbacks Organization All-Star (MiLB.com), and a Midwest League Mid and Post-Season All-Star. He was also selected to the National League Futures roster for the 2019 Sirius XM All-Star Futures Game.
No. 12­­-rated Henry enters the 2021 season as the 12th-best prospect in the Arizona Diamondbacks’ organization. He was selected in the 2nd round (74th overall) in the 2019 June draft out of the University of Michigan. He was assigned to Hillsboro and made his professional debut on 7/23/19, making three total starts (3.0 IP total). Henry spent the 2020 season at the D-backs Alternate Training Site.
The 2021 season begins on Tuesday, May 4 on the road against the Tulsa Drillers at ONEOK Field in Tulsa, Oklahoma with first pitch scheduled for 7:05 p.m. The Sod Poodles home opener at HODGETOWN is scheduled for Tuesday, May 18 against the Midland RockHounds with first pitch at 7:05 p.m.
Local