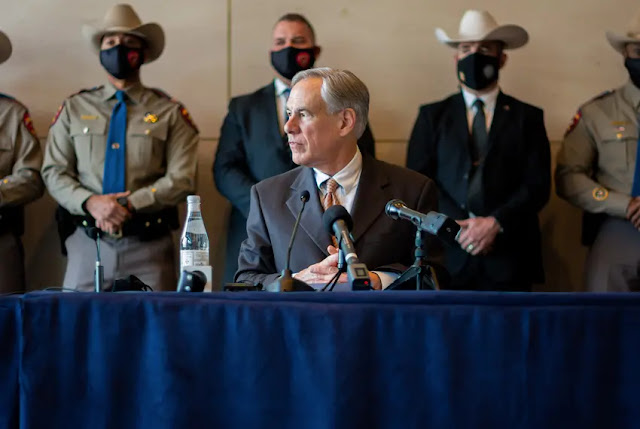 By Ross Ramsey
Whether or not you’re ready to get back to normal, your governor is.
Greg Abbott has been moving quickly to set the state to pre-pandemic mode, banning mask requirements, cutting pandemic aid for jobless Texans in hopes they will return to the workforce and setting the table for schools to open in-person classes for all of their students, no masks required.
He’s returning to political norms, too, with enthusiastic approval of legislation that outlaws abortions after six weeks of pregnancy — he signed that on Wednesday — and signaling his eagerness to sign a bill that would let most adults in the state carry handguns without licenses or permits. The House and Senate are negotiating to resolve their differing versions of that legislation. Abbott had “election integrity” on his list of priorities early in the session; that Republican concern is also a subject of negotiations, and lawmakers are trying to shake out big differences between the House and Senate versions. Democrats in both chambers oppose the bill.
All of that is a return to the Republican-centered politics of 2017 — an era interrupted by Democratic gains in the 2018 elections and set right in the stronger and more typical Republican showing in the 2020 cycle. The 2017 session was known for the “bathroom bill” — an effort by social conservatives to bar transgender individuals from using public and school restrooms that match their gender identities.
The next session, in 2019, was all about public education, school finance and other “meat and potatoes” issues — a reaction by the state’s top leaders to a 2018 election that was unexpectedly competitive and that shrunk the GOP majority in the Legislature.
Democrats talked big in 2020, but didn’t produce results. Republicans swept the statewide elections, held their own in the Legislature and roared into the current legislative session worried less about facing Democrats in the next general election and more about facing fellow Republicans in the next primary election.
The moderation of 2019 was followed by a sharp right turn this year. And as we move to the end of the session in less than two weeks, into a period when the governor can kill bills or allow them to become law, and then into the 2022 political cycle, Abbott’s dropping pandemic regulations, trying to push people back to work and taking care of Republican voters.
He’s back to normal.
It follows a rough patch of more than a year for the governor, one that saw his popularity with voters whipsawed with every change in the strength of the coronavirus in Texas and in his official reactions to it.
Now he’s back to about where he was at about this time last year, as the pandemic’s first growth surge slowed and the state began loosening restrictions put in place to flatten the curve.
That was a different phase of the pandemic, and Abbott’s quick reopening marked the beginning of a surge in coronavirus cases, hospitalizations and deaths last summer.
Right now, the numbers are going the governor’s way. More than 30% of Texans are fully vaccinated. Nearly 3 million Texans have either had confirmed or probable cases of COVID-19, but current caseloads are at June 2020 levels. Hospitalizations, at 2,222 on May 18, have fallen to about where they were in early June 2020. And death rates, which peaked in Texas earlier this year, are also about where they were late last spring.
The Centers for Disease Control and Prevention has eased its guidance on masks — with the proviso that unmasking is safe for people who have been fully vaccinated.
It’s clear to anyone who’s been out and about that more people are doing things they did before the pandemic: Shopping, going to restaurants and parks, sometimes masked and sometimes not.
And the governor apparently shares their exuberance. He told schools and government entities — with a few exceptions — that they can’t require people to wear masks. He joined other states in opting out of $300 per month in federal jobless benefits tied to the pandemic, prodded by business groups who contend those benefits are one reason some jobs aren’t attracting applicants.
Texans have been clamoring for a return to normal for more than a year, a yearning that pressured the governor — and his counterparts in some other states — to open things too quickly and too broadly. This time, it appears to be working — and the governor appears to be all in.
This article originally appeared at the Texas Tribune.
Opinion