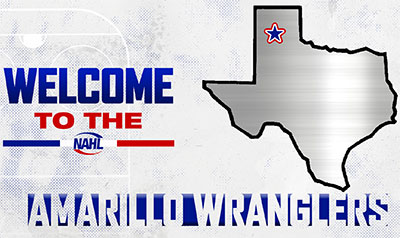 The North American Hockey League (NAHL) has announced that the Kansas City Scouts and owner Loretto Sports Ventures, LLC, has agreed to sell their NAHL membership to Amarillo Ice Sports, LLC. The team has been relocated to Amarillo, Texas, and renamed and pay tribute to the original hockey team in the Texas Panhandle, the Amarillo Wranglers.
Amarillo Ice Sports, LLC is locally owned and operated by the Amarillo Hockey Association (AHAI), Chris Wright (President), Roger Wright, and Amarillo hockey alumni Eric Andersen and Austin Sutter. The original Amarillo Wranglers were the Pittsburgh Penguins farm team that played in Amarillo in the late 60’s and early 70’s. Sutter will be the President of the team and the games will be played at the Civic Center in downtown Amarillo.
“Amarillo Ice Sports is thrilled to have the opportunity to not only continue the presence of an NAHL team in Amarillo, but also to bring local ownership to the mix. We believe that the combination of the Wranglers and the new Ice Ranch will provide great opportunities to all ice sports enthusiasts in the Panhandle for years to come. There are many people who made this possible, but we are especially grateful to the Lamar Hunt, Jr., Mayor Ginger Nelson and the Amarillo City Commission, Amarillo City Manager Jared Miller, Amarillo Deputy City Manager Kevin Starbuck, and NAHL Commissioner Mark Frankenfeld for their help, support and belief in our vision for ice sports in West Texas,” stated Chris Wright, President of Amarillo Ice Sports, LLC.
“We are excited to be able to continue NAHL hockey in Amarillo. With this local ownership group behind it and a passionate fan base, we are excited to see the rivalries in the South Division continue,” said NAHL Commissioner and President Mark Frankenfeld.
The Amarillo Wranglers will be a part of the NAHL’s South Division during the upcoming 2021-22 season. The division will have eight teams competing in the NAHL during the 2021-22 season: Amarillo Wranglers (Amarillo, TX), Odessa Jackalopes (Odessa, TX), Wichita Falls Warriors (Wichita Falls, TX), Lone Star Brahmas (North Richland Hills, TX), New Mexico Ice Wolves (Albuquerque, NM), Corpus Christi Ice Rays (Corpus Christi, TX), El Paso Rhinos (El Paso, TX) and the Shreveport Mudbugs (Shreveport, LA).
“Hockey is thriving and better than ever in this region. The merging of the youth and adult programs, the Ice Ranch and the Wranglers will be instrumental in continuing to grow the great game of hockey in our community. We strongly feel that Amarillo is now the perfect market for an NAHL franchise to succeed and will continue to be a staple in the Panhandle for another 25 years and more,” said Sutter, President of the Wranglers.
Amarillo Ice Sports, LLC also owns and operates the Amarillo Ice Ranch. The new community ice skating rink will open in June and is located across the street from the Civic Center at 301 S. Grant street. The Ice Ranch will offer ice sports activities to the community year-round, including youth hockey, adult hockey, figure skating, public skating, birthday parties, corporate events, broomball and much more. Andersen will serve as the President of the Ice Ranch.
“We are very excited for the continued growth of Ice sports and the game of hockey in the Panhandle. We have a passionate hockey family here in Amarillo and our city deserves this opportunity,” stated Andersen, the former Amarillo Gorillas defenseman and President of the Ice Ranch.
The Wranglers are doing a national search for a head coach and will be revealing the team logo and colors at a later date. Season tickets will be on sale in a near future date.
Sports