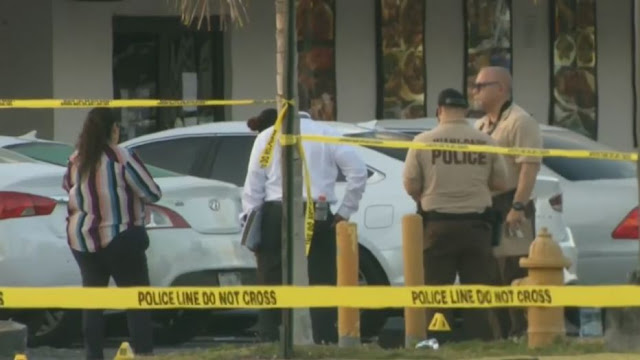 Two people were killed and more than 20 others were injured in a shooting in Miami early Sunday morning.
According to a statement from the Miami-Dade Police Department, three individuals exited an SUV and started “shooting indiscriminately into the crowd," before re-entering the vehicle and fleeing the scene.
Two people were pronounced dead at the scene, and Miami-Dade Fire Rescue transported eight other individuals to local hospitals. Twelve other victims were self-transported to hospitals.
At least one shooting victim was in critical condition.
The department said an investigation is currently underway to locate the alleged suspects.
The shooting took place on 186th Street at an establishment that was hosting a scheduled event, according to investigators. Multiple patrons, they noted, were standing outside.
Alfredo Ramirez III, the director of the Miami-Dade Police Department, said the incident was “another targeted and cowardly act of gun violence."
Sunday’s incident follows a number of Florida-area shootings this month.
At least seven people were injured on Saturday when a gunman opened fire in the Wynwood neighborhood, an art-filled spot known to be popular with tourists.
Earlier this month, multiple people were left wounded after a shooting at a mall in Aventura, Fla.
Additionally, Sunday's incident follows a nationwide spike in fatal shootings. Last week, nine people were killed after a gunman opened fire at a rail yard in San Jose, Calif. The shooter was also reported dead.
National