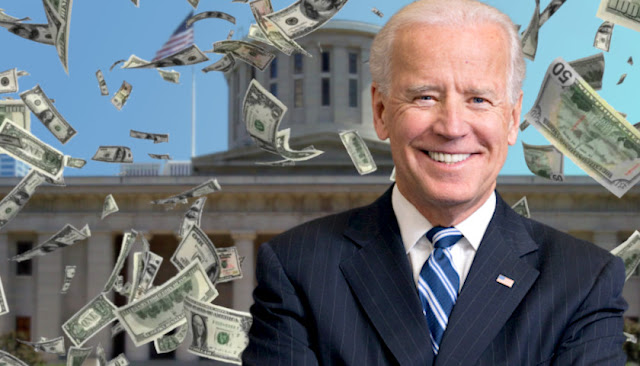 The White House is readying another massive spending proposal that would cover child care, universal pre-K and community college tuition, even as the path forward on its $2.3 trillion infrastructure package remains unclear.
President Biden is expected to outline his American Families Plan proposal before delivering a joint address to Congress on April 28. The White House has not provided details on the plan, but it is expected to address so-called human infrastructure like child care and family care programs, with a price tag that could hit $1 trillion.
“President Biden has already put forward the first part of his historic plan to invest in the strength of America’s economy and families, and he’ll be outlining the second element of that proposal in the coming days,” Mike Gwin, a White House spokesman, said in a statement.
“The details of that package are still being finalized, so speculation as to its final contents is premature at this point.”
The Washington Post first reported the contours of the proposal, which is said to designate $225 billion for child care funding, $225 billion for paid family leave programs, $200 billion for universal pre-K and billions more for other educational programs.
The package is also expected to include billions of dollars worth of tax credits, including an extension of the expanded child tax credit that was passed in an economic relief bill earlier this year, the Post reported.
The American Families Plan would mark the third major legislative proposal Biden has pushed in the three months since he took office. But its rollout comes while the president and White House officials are still negotiating with lawmakers on both sides of the aisle over the $2.3 trillion proposal that’s focused on more traditional infrastructure like roads, bridges and broadband, as well as investments in climate-friendly industries.
Biden has held meetings each of the last two weeks with different groups of lawmakers from both parties and both chambers of Congress to discuss the infrastructure package.
“I am prepared to compromise, prepared to see what we can do and what we can get together on. It’s a big package, but there’s a lot of needs,” Biden said on Monday.
The White House has said it hopes to see progress on the infrastructure bill by Memorial Day. But the fate of that package, and whether Democrats will choose to sidestep Republicans by using the budget reconciliation process, could loom over how the White House attempts to move forward with its new spending plan.
That also raises questions about whether the White House will seek to combine the two packages into one, at a potential cost of $3.3 trillion, and avoid a likely GOP filibuster to get the mammoth bill through Congress.
Some Senate Democrats, such as White House ally Chris Coons (D-Del.), have suggested finding areas of common interest with Republicans on infrastructure and passing a winnowed-down version of that legislation while lumping other Democratic priorities into a separate bill to be passed through reconciliation.
One Democratic strategist close to the White House said it was notable the administration rolled out the two infrastructure packages separately.
“Maybe they combine them at the end, but it’s easier to throw one under the bus or separate out poison pills” if certain aspects don’t receive enough support, the strategist said.
The White House has proposed paying for the $2.3 trillion package through an increase in the corporate tax rate. While Biden has been clear he’s open to discussing how significant of an increase should be imposed, Republicans have overwhelmingly balked at the idea and instead suggested user fees or some other method to pay for the proposal.
To fund the second component, the White House is likely to propose tax increases on wealthy Americans. And while officials have repeatedly said individuals and households making less than $400,000 will not be affected, the prospect of any tax hike is unlikely to win over Republican support, further raising the likelihood that Democrats will ultimately need to rely on reconciliation if they want the entirety of Biden’s two proposals signed into law.
“He believes it should be paid for, and there are really two options,” White House press secretary Jen Psaki said Tuesday when asked about the prospect of user fees paying for the first infrastructure proposal. “Either you put the burden on the backs of corporations that can afford to pay more, or you put the burden on the backs of the American people.”
National