US begins moving equipment out of Afghanistan 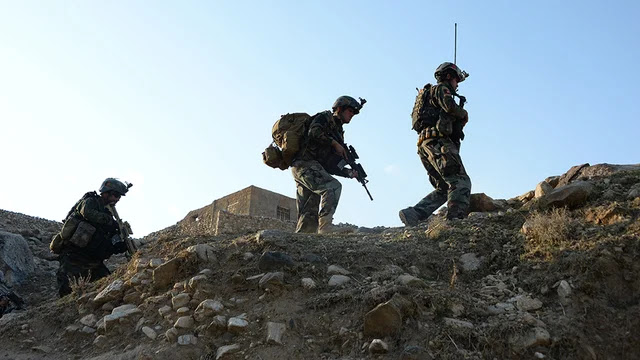 The U.S. military has begun to move equipment out of Afghanistan but sent in extra defenses as forces prepare to withdraw from the country, the Pentagon confirmed Friday.
Defense Secretary Lloyd Austin earlier on Friday approved keeping the USS Eisenhower aircraft carrier in the region “for a period of time,” as well as sending several B-52 long-range bombers to the region, press secretary John Kirby told reporters.
In addition, “there could be temporary additional force protection measures and enablers that we would require to make sure…that this drawdown goes smoothly and safely for our men and women,” Kirby said.
Kirby noted that the efforts were in response to the possible threats from the Taliban, who have expressed their displeasure with the Biden administration’s decision to forego a deal made between the insurgent group and the Trump administration to withdraw all U.S. forces by May 1. Washington now aims to have all forces out by Sept. 11.
“The secretary’s been clear, we have to assume it would be foolhardy and imprudent not to assume that there could be resistance and opposition to the drawdown by the Taliban given their staunch rhetoric,” Kirby said.
“We’ve made it clear that force protection is going to be a priority as we begin to move all our military personnel out of Afghanistan and that means giving the commander on the ground, [U.S. Forces Afghanistan head Gen. Scott Miller], options. ... Things like bombers provide you options, things like strike aircraft off an aircraft carrier provide you options. Options are important in a mission like this.”
Also part of the drawdown, the military has begun the process of removing equipment from the region.
While personnel will not begin to move out of Afghanistan for weeks to come, officials have begun to decide what equipment and systems will be inspected, cleaned and shipped back to the United State; what will be deployed elsewhere in the region; what would be provided to Afghan forces; and what would be destroyed.
Miller and U.S. Central Command head Gen. Frank McKenzie are currently revising removal plans previously in place under the Trump administration and will present the updated proposal to Austin in the coming days, Kirby said.
Equipment to be moved from Afghanistan to the United States would largely be done by Air Force cargo aircraft, he added.
Kirby did not yet have a cost estimate for the effort.
President Biden last week detailed his plan to withdraw U.S. troops from Afghanistan, stating that the deadline would be by the 20th anniversary of Sept. 11, which sparked the war.
“War in Afghanistan was never meant to be a multigenerational undertaking,” Biden said during a speech at the time. “It’s time to end the forever war.”
Under the president's directive, the military will not be given an extension due to conditions on the ground.
Nearly 2,500 U.S. forces are still stationed in Afghanistan in addition to hundreds of special operations forces. Roughly 1,000 ground troops are also set to be sent to Afghanistan as part of the beefed up force protection for troops leaving the nation, CNN reported.
World