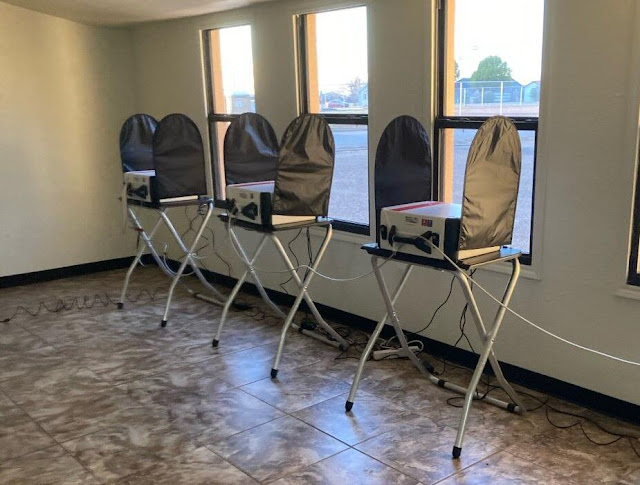 At the Shallowater community center last Friday, Alderman David Brugel was hosting a campaign event.
The center, also referred to as "the clubhouse", is an early voting location.
And feet away, several voting machines lay behind an unsecured door.
County commissioner Jason Corley who was in attendance made the discovery.
"[I] walked into the kitchen area, and on the way to the bathroom looked over and saw the voting machines. And said, 'oh that's a problem'," Corley explained.
He says there was only one door, out of several, that was unlocked and happened to have a push bar.
He notified the County Judge, the County Elections Office and the Sheriff's Office.
"There's always a concern when you put your machines out and you leave them locked in a room and somebody says 'oh, something might of happened,'" Elections Administrator Dorothy Kennedy said.
Kennedy says it is regular protocol to deliver some elections materials the weekend before early voting begins.
In her 18 years on the job, she says nothing like this has happened.
Though concerning, it is not actually considered a security breach according to Texas law.
"None of the equipment was actually touched. All the seals were still on there, everything was still intact as it was left earlier that day," Kennedy said.
Section 129-051 of the Texas Election Code requires "an election information storage medium" to be kept by an election official or in a secured location.
But it is actually referring to something called a "controller", not the actual voting machines.
At the time it was under lock and key at the elections office.
"These [machines] are just boxes of metal that do nothing until the deputy comes in Monday morning and brings the controller unit," Kennedy explained. "Then, when that is connected then these become voting machines."
The county elections office did replace them on Sunday evening however, out of an abundance of caution.
"Our number one concern here in Lubbock County is to make sure that our voters know that their elections are safe, secure and transparent. It's fair to candidates, it's fair to voters," Kennedy said. "They know that when they get their results on election night, that's exactly what it is."
Community activities scheduled during the early voting period were also cancelled.
Kennedy says moving forward that will be the norm.
Local