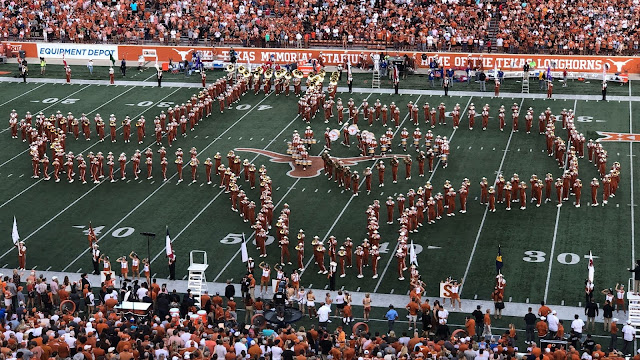 The University of Texas at Austin on Wednesday in response to concerns about its fight song “The Eyes of Texas” said that while football players and students attending will not be forced to sing the alma mater at the end of games, the Longhorn Band will be required to perform it.
The university said in a press release on the Butler School of Music’s website that members of the band, as well as the Longhorn Pep Band, “will have a required repertoire, including traditional university selections such as the alma mater and fight song.”
However, the press release also stated that the university will be adding a new band to the school’s music program that will be “an academic for-credit course through the Butler School beginning in fall 2022 that will not play the university alma mater or fight song.”
University President Jay Hartzell, who approved the new music plans, said in a statement Wednesday, “We need to celebrate and nurture what makes UT special, and the Longhorn Band is one of those great organizations that shape our campus culture, elevate school spirit and provide amazing opportunities for our students.”
Hartzell added that the university’s “multi-million-dollar commitment over the next five years will support the Longhorn Band in restoring – and even going beyond – its former glory, while also providing strong support for our entire portfolio of university bands.”
The university said that members of its marching bands, including the new not-yet-named band, will each receive a performance scholarship of $1,000, with band section leaders receiving a minimum of $2,500, in addition to merit scholarships that already exist for the students.
The changes come as members of the university community have become increasingly divided over the alma mater, with a growing number arguing that it has a racist history.
Last month, reports emerged that wealthy donors to the school were considering withholding their contributions unless the school changed the fight song, and some football team members said they had been threatened after calling for the song to be removed from games.
A week later, a report that had been commissioned by Hartzell in 2020 to look into the history of “The Eyes of Texas,” found that while the song itself has "no racist intent," it was used in racist settings throughout the school’s history, including in minstrel shows and in periods when Black students were not allowed on campus.
While Hartzell at the time said the commission’s findings did provide enough justification to completely remove the song, it would not require players or students to sing it at sports games and school events.
Texas