Trump: I would 'certainly' consider DeSantis as 2024 running mate 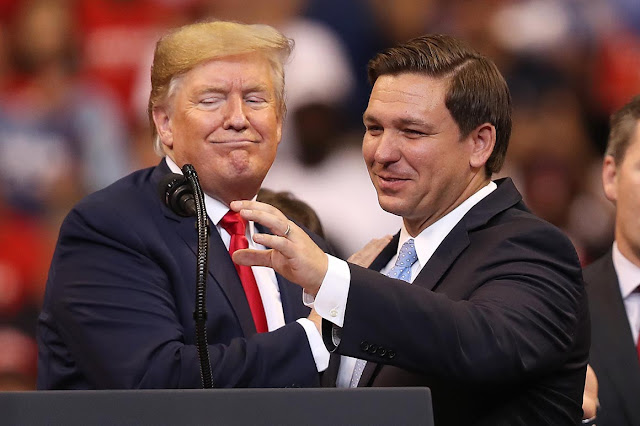 Former President Trump on Thursday said he would consider tapping Florida Gov. Ron DeSantis (R) as his running mate should he make a comeback presidential bid in 2024.
“Well, he's a friend of mine. I endorsed Ron. And after I endorsed him, he took off like a rocket ship,” Trump said Thursday morning on Fox Business, referencing DeSantis’s 2018 race. “He's done a great job as governor.”
“A lot of people like that — I'm just saying what I read and what you read, they love that ticket,” Trump added. “But certainly, Ron would be considered. He's a great guy.”
Trump has not yet definitively said if he will run for president again, keeping a slew of possible GOP presidential hopefuls wary of crossing the party’s most popular figure. He kept up the anticipation Thursday by saying he’s “100 percent” considering mounting a bid.
DeSantis’s office did not immediately respond to a request for comment regarding Trump’s remarks. However, the Florida governor has been touted by Republicans as a potential presidential candidate in 2024 should Trump not run.
DeSantis has garnered plaudits from across the GOP over his refusal to impose strict restrictions on schools and businesses during the coronavirus pandemic. He also won new fans after her vociferously rebuked a faulty “60 Minutes” report that included allegations of favoritism by the governor’s office.
A survey run by Tony Fabrizio, who did polling work for Trump’s 2020 campaign, showed last month that DeSantis and former Vice President Mike Pence are the two front-runners in a list of potential 2024 Republican candidates that does not include Trump.
Should DeSantis run, he’d also likely have a massive leg up in a general election in Florida, a key swing state that has tilted toward Republicans in recent cycles.
Beyond DeSantis’s 2024 prospects, Trump’s comments Thursday also mark the latest indication that he would not tap Pence as his No. 2 should he run in three years.
Trump has repeatedly lambasted Pence for what he sees as insufficient efforts to overturn the results of the November presidential election when he oversaw Congress’s certification of the Electoral College tally.
"Mike Pence didn’t have the courage to do what should have been done to protect our Country and our Constitution, giving States a chance to certify a corrected set of facts, not the fraudulent or inaccurate ones which they were asked to previously certify. USA demands the truth!" Trump tweeted from his now-suspended account during the Capitol insurrection on Jan. 6.
National