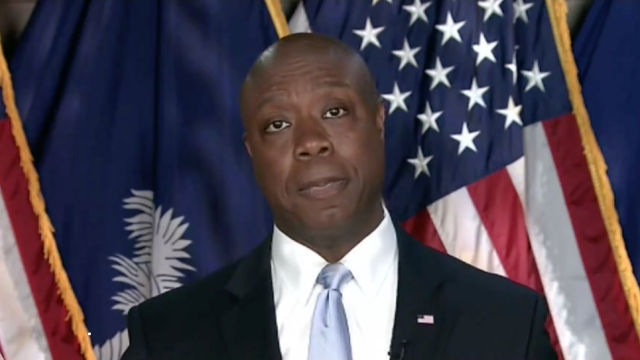 Sen. Tim Scott (R-S.C.) on Wednesday night accused President Biden of dividing the country, as Republicans try to paint the president as out of touch with his talk of bipartisanship.
"Our President seems like a good man. His speech was full of good words. But President Biden promised you a specific kind of leadership. He promised to unite a nation. ...But our nation is starving for more than empty platitudes," Scott said, delivering the party's formal response to Biden's joint address to Congress.
He added that roughly 100 days into the administration, "the actions of the President and his party are pulling us further apart."
Scott knocked Biden's $2.3 trillion infrastructure proposal as well as a separate $1.8 trillion spending plan, and contrasted the five coronavirus bills that passed with bipartisan support last year to the $1.9 trillion legislative package that passed this year along party lines.
“COVID brought Congress together five times. This administration pushed us apart," he said.
The speech, used to highlight rising stars within the party, marked Scott's biggest step into the national spotlight. Scott, the only Black GOP senator, has said 2022 will be his last Senate race, but he's considered a contender for the party's 2024 nomination.
Scott used his speech to nod at issues that fire up the party's base, mentioning a push by progressives to expand the Supreme Court, and contrasting GOP policy goals with "Washington schemes or socialist dreams" from Democrats.
He also appeared to try to thread a needle in talking about the previous administration's wins, including the COVID-19 vaccine development program and the economy. He only mentioned Trump's name once.
“This administration inherited a tide that had already turned. The coronavirus is on the run. Thanks to Operation Warp Speed and the Trump administration, our country is flooded with safe and effective vaccines. Thanks to our bipartisan work last year, job openings are rebounding," Scott said.
Scott used the national stage to talk about his own story on race, including his experiences with being profiled.
"I know what it feels like to be pulled over for no reason. To be followed around a store while I’m shopping," he said. “I’ve also experienced a different kind of intolerance. I get called 'Uncle Tom' and the N-word — by ‘progressives’! By liberal."
Though Scott didn't mention the Washington Post by name, he hit back at a fact-check that sparked fierce conservative backlash. The piece, written by Glenn Kessler, examined the family history of Scott by using census and property records and the help of historians.
"Just last week, a national newspaper suggested my family’s poverty was actually privilege because a relative owned land generations before my time," he said.
Scott also knocked Democrats for calling the legislative filibuster a "Jim Crow relic," a reference to its use to block civil rights legislation, saying that it "has not suddenly become a racist relic just because the shoe is now on the other foot."
And he defended his party on voting rights, including defending a new Georgia law, even as multiple state legislatures have seen bills introduced to tighten voting laws.
"Hear me clearly: America is not a racist country," he said. “I’m an African-American who has voted in the South all my life. I take voting rights personally."
Even as Scott sought to draw a contrast with Democrats, he's leading the GOP effort to try to come up with a bipartisan police reform bill.
As soon as he stopped delivering the party's formal response, he pivoted to talking about what is next on the bipartisan effort, which he said was unlikely to product a deal until as early as next month.
"Well we’re meeting tomorrow," he told reporters, "and we'll see what happens next."
National