The actual problem at our southern border 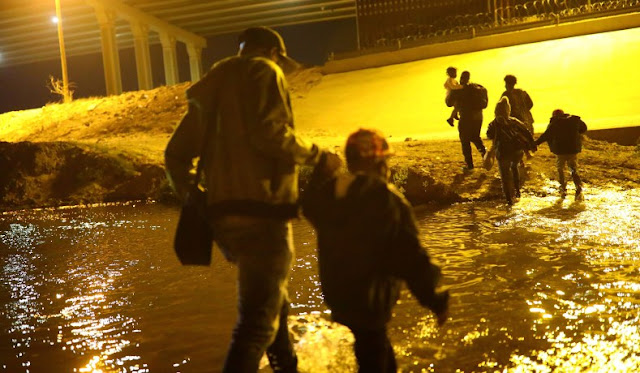 There seems to be disagreement about the nature of the problem at our southern border.
Much of the commentary has been about the terrible conditions in which migrants are being held. And the conditions are indeed terrible — children and teenagers warehoused in Border Patrol facilities not built for that purpose, awaiting transfer to HHS-managed shelters, where they’re held until the government can locate and vet (-ish) sponsors, usually their illegal-alien relatives, to deliver them to. Meanwhile, adult illegals bringing children with them have also overwhelmed the DHS’s capacity — in some instances they’re having to sleep under a bridge until they can be processed further.
The Democrats’ diagnosis is that this massive and growing flow of illegal aliens is not being processed fast enough into the U.S. The solution, therefore, is increased capacity, so that ever-larger numbers of illegal-alien families and minors will be processed quicker and more comfortably into the country. White House press secretary Jen Psaki, for instance, said last week that “our focus is on addressing the needs, opening up shelters, ensuring there is access to health and educational resources, expediting processing at the border.”
But the overcrowding, etc. is merely a symptom, not the actual problem, which is that huge numbers of people are illegally surging across our border. March apprehensions by the Border Patrol reached a 20-year high, with the number of unaccompanied children double the February level, and those family units nearly triple from the month before. The border crisis is rapidly approaching the scale of the 2015 disaster in Europe, also sparked by irresponsible comments and policies by government leadership, in that case by German chancellor Angela Merkel.
Under administration orders, they are no longer really trying to prevent people from entering the U.S. illegally. Rather, they are attempting to humanely house and feed the thousands prior to releasing them into the country. The border’s guardians are overwhelmed and increasingly giving way to bureaucratic pressure to let most people in.
The numerical immigration limits and eligibility rules established by Congress are being comprehensively subverted by the Biden administration’s conscious decision to permit the large-scale admission of illegal aliens and to collude with them in systematic abuse of our asylum law. Few of those admitted to claim “asylum” qualify for it — many will not even bother to apply, and those who do, and lose, will not be made to leave.
In other words, in seeking more expeditious processing of illegal aliens at the border, the Biden administration is implementing an extra-legal increase in the number of de facto permanent residents of the U.S. That’s the problem at the border, and to the extent the administration does anything to try to moderate it, it’s only because of the political cost it is paying, not because it accepts it as a problem.
The good news is the Biden administration has, in the words of White House Press Secretary Jen Psaki, convinced Mexico to “maintain 10,000 troops at its southern border, resulting in twice as many daily migrant interdictions.  Guatemala surged 1,500 police and military personnel to its southern border with Honduras and agreed to set up 12 checkpoints along the migratory route.  Honduras surged 7,000 police and military to disperse a large contingent of migrants.”
The amazingly ironic news is that the the Biden administration has gotten three countries to deploy military troops to their borders to prevent migrants from crossing them, and is applauding the use of thousands of police officers and military to “disperse a large contingent of migrants.” Psaki added, “the objective is to make it more difficult to make the journey and make crossing the borders more — more difficult.”
The thing is, if Joe Biden and his administration really want to make the journey and make crossing the borders more difficult… maybe they should rescind the executive order that paused all work on each construction project on the southern border wall, and restart certain wall construction projects to fill the gaps, as certain figures in the administration are reportedly contemplating?
Opinion